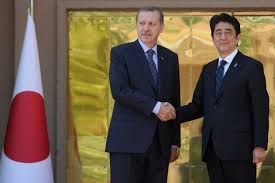 Japan and Turkey on Friday signed a long-awaited deal to build a sprawling nuclear power plant on Turkey’s Black Sea coast, a milestone for the Japanese nuclear industry as it recovers from the 2011 Fukushima disaster.

Turkish Prime Minister Recep Tayyip Erdogan hailed the $22 billion contract as a “very important step” that would transform bilateral relations with Japan into a “strategic partnership.”

A Japanese-French consortium won the lucrative deal to build Turkey’s second nuclear plant, notching up Japan’s first successful bid on an overseas nuclear project since a tsunami wrecked the power station in Fukushima, the world’s worst nuclear accident in a generation.

Turkey weathered criticism for teaming up with Japan in light of the catastrophe, but “despite that, we have taken this step,” Erdogan said.

“What happened at Fukushima upset all of us. But these things can happen. Life goes on. Successful steps are being taken now with the use of improved technology,” the Turkish premier added.

Like Japan, Turkey lies in a part of the world that is prone to earthquakes, making it essential that nuclear plants are designed to resist such events.

The agreement came a day after Japan signed a nuclear cooperation deal with the United Arab Emirates.

Japanese Prime Minister Shinzo Abe, who arrived in Turkey as part of a wider Middle Eastern tour, said that Japan had learnt important lessons from the 2011 catastrophe.

“Japan will share its experience and the lessons it has learnt and will contribute to the improvement of nuclear security at the highest level,” Abe said in comments translated into Turkish.

Abe and Erdogan also signed an agreement covering the peaceful use of nuclear energy which could reassure those tracking an international stand-off with neighbouring Iran over its disputed nuclear programme.

The winning consortium includes the Japanese group Mitsubishi Heavy Industries and power company Itochu, the French energy company GDF-Suez and a Turkish company that remains to be determined.

French energy company Areva is to supply the plant’s reactors in connection with Mitsubishi.

The Sinop plant is to comprise four reactors with a combined output of 4,800 megawatts. Construction is to begin in 2017, with the first reactor to be operational by 2023, an energy ministry official said.

Turkey, which relies heavily on gas and oil imports from Russia and Iran, wants to build a total of three nuclear power plants to reduce its dependence on foreign supplies.

In 2010, Ankara struck a deal with Russia to build the country’s first power plant at Akkuyu, in southern Turkey.

“They made their interest clear but we’ve not made any promise,” he told reporters after the signing ceremony, though Turkish and Japanese engineers were to work together to find a location for the third plant.

Japan did not ask the Turkish government to guarantee financing for the current project, which Yildaz welcomed as a sign of Tokyo’s trust in Turkey’s political stability.

Yildiz did not say why the Chinese bid was not retained but noted: “We’ll develop more projects with China.