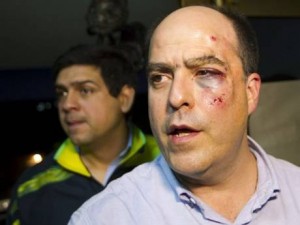 The bitter dispute over Venzuela’s first post-Chávez election has erupted into an all-out brawl in the country’s Parliament between government and opposition members, leaving several people injured.

Opposition figures said seven of its parliamentarians were hurt while protesting against a measure blocking them from speaking at the National Assembly until they recognise Nicholas Maduro’s election as president.

Elections were held after the death of Venezuela’s talismanic socialist president Hugo Chávez in March.

Maduro, Chavez’s vice president and chosen successor beat opposition candidate Henrique Carpriles by 1.5 per cent of the vote. Capriles has refused to recognise the victory, saying the vote was “stolen” and alleging that thousands of irregularities occurred.

Government legislators blamed the opposition for the violence.

One assembly worker told the Reuters news agency that the brawl was sparked when opposition leaders shouted “fascist” at the National Assembly leader and unfolded a banner reading “parliamentary coup”. Government members attacked them and tables and laptops were thrown, with one legislator hit over the head with a chair, the witness said.

“We knew the opposition came to provoke violence,” Maduro said of the incident. “This must not be repeated.”

Oppositon parliamentarian Julio Borges, showing a bloodied face, told a local TV station: “They can beat us, jail us, kill us, but we will not sell out our principles. These blows bring us more strength.”

The government and opposition are planning rival marches in Caracas today to mark May Day.