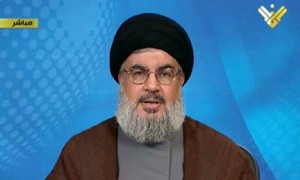 Hassan Nasrallah, the leader of Hezbollah, has confirmed for the first time that members of the powerful Lebanese Shia organisation are helping President Bashar al-Assad fight the uprising against his rule – and will stand by him.

Nasrallah – a close ally of Assad – also hinted that Russia and Iran, Syria’s principal supporters, would intervene militarily to prevent his defeat.

“Syria has real friends in the region and the world that will not let Syria fall in the hands of America, Israel or Takfiri (extreme jihadi) groups,” Nasrallah said in a broadcast on Hezbollah’s al-Manar TV channel. “How will this happen? Details will come later. I say this based on information … rather than wishful thinking.”

Alluding to concerns about growing sectarianism in the region, Nasrallah that there would be “dangerous retribution” if any harm befell the historic Sayyida Zeinab Shia shrine near Damascus.

Fighting in the Qusayr region inside Syria but close to the Lebanese border, was “not over,” he said. Overall, his combative statement was widely seen as a pledge of public support for the Damascus government – and as such an escalation of the already grave crisis.

“Nasrallah just made sure Syria will get a lot worse,” commented analyst Emile Hokayem of the International Institute for Strategic Studies. The speech was broadcast a day after Nasrallah arrived in Tehran to attend an Islamic conference.

Hezbollah had acted in defence of Lebanese border villages attacked by anti-Assad rebels so it was “normal to offer every possible and necessary aid to help the Syrian army, popular committees (pro-government militia) and the Lebanese,” Nasrallah said

Hezbollah fighters have been seen in Syria helping the government from early on in the 25-month uprising but their presence, long formally denied, has become much both more open and large-scale in recent weeks, and funerals of fighters killed there are now a regular occurrence in Lebanon

Hezbollah counts itself as a key participant in the “axis of resistance” comprising Syria, Iran and Palestinian groups which are opposed to both the PLO and Israel. It is thought likely to respond to any Israel attempt to target’s Iran’s nuclear programme. But Nasrallah denied it had launched a drone downed in Israeli.

Hezbollah’s arsenal, especially of long-range rockets, makes it the most powerful military force in Lebanon.