Syrian lights self on fire in Beirut 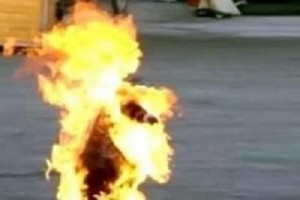 A Syrian man has sustained third degree burns after setting himself on fire at a main square in Beirut, the state-run National News Agency reported on Monday.

NNA said that Ahmed Mahmoud al-Youssef, 19, was taken to the Geitaoui hospital on Sunday night when he self-immolated by pouring gasoline over his body at Barbour square in Corniche al-Mazraa.

Reports have said that the Syrian national had financial troubles and debts and was incapable of paying them.