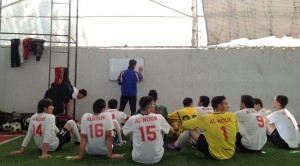 In Halba, in the district of Akkar, in northern Lebanon, a football team called “Al-Nour” – “the light” in Arabic – is drawing increasing attention from the inhabitants of the region. The team was set up by Tareq Al Awaychi, a former star of the Syrian team Al Karami, who had to flee the violence in his country that has killed over 70,000 people since the beginning of the uprising against the regime of President Bashar Al-Assad in March 2011.

Tareq arrived in Lebanon, one of some 400,000 Syrian refugees in that country. Smaller numbers of refugees have fled to Jordan and Turkey. But the trauma suffered is the same. They have lost their homes, are separated from families and have to Being part of the football team is extremely significant, especially for the young Syrian refugees. It helps them adapt to their new life in Lebanon, deal with the daily stress and it makes them feel much better.scrape by with whatever they are provided by aid agencies and can barely eke out a living with employment opportunities hard to come by.

At first, Tareq didn’t want anything to do with football. After witnessing the death of several close friends and teammates and the terrible suffering of his fellow compatriots, playing football was the last thing on his mind. However, Tareq quickly discovered that he couldn’t live without football.

So with the help of the local Community Centre supported by the UN High Commissioner for Refugees (UNHCR), which is funded and operated with the Danish Refugee Council and a local non-governmental organization, he began to pull together a team composed of both young Syrian refugees and young local Lebanese players, whom he started coaching.

According to UNHCR’s Senior Community Services Assistant, Farah Hammoudeh, from the Halba Community Centre, this initiative has been a huge success because it gives purpose to the young Syrian refugees, and their famous coach, and helps them overcome the traumatic experiences they have been exposed to in Syria. It also serves to bring the Syrian refugees and the local host community together.

The team is composed of 18 players – 70 per cent are Syrian refugees and the rest are young Lebanese. They come together for training twice a week and they compete against other teams in a local league in the north of Lebanon.

“Being part of the football team is extremely significant, especially for the young Syrian refugees. It helps them adapt to their new life in Lebanon, deal with the daily stress and it makes them feel much better,” Ms. Hammoudeh explained in a telephone interview with the UN News Centre.

“It’s good that this team is becoming more and more famous. There are plenty of locals in the Halba area who are really keen to play with this team,” she said. “However, the downside is that sometimes when they are playing with local teams, the residents might feel a bit put out if the Syrian-Lebanese team is winning, because they could find it difficult to accept that someone from outside has the edge.”

Many Lebanese welcomed the Syrian refugees with open arms, but they also thought this would be for a limited period of time. Now, their presence is more open-ended as the conflict enters its third year. The players told Ms. Hammoudeh that they worry about background tensions, and whether the local population might be resentful if they end up winning too many of their games.

At the same time, increasing numbers of young Lebanese are asking to join the team. Tareq Al Awaychi is a famous player in the region and he attracts a lot of young football hopefuls who are eager to learn from him and to benefit from his training.

The Halba Community Centre is one among many venues in Lebanon trying to create a safe space for refugees fleeing the conflict in Syria. The majority of the Syrian refugees in the district of Akkar come from Homs and Talkalakh, some of the hardest hit areas in Syria. Building trust among the refugees is a difficult task.

“The integration is difficult, as many of the people from Homs and Talkalakh are very conservative and religious. For example, many of the women weren’t allowed to go out. It was not easy to build the trust, but women are now coming to the Centre to participate in courses and projects, and that is a real success,” explained Ms. Hammoudeh.

“In an area like Akkar, it is a real challenge to find work. In our Community Centre, we realized that one of the main priorities is to find livelihoods, especially for the women, now that it has become clear that the refugees will be here for the long haul. We are attempting to provide training that can lead to finding work. It is especially difficult for the female heads of households to find jobs,” she explained.

“For the men, it is a little bit different as they can find daily work in the agricultural sector, or they can move to the larger cities like Beirut or Tripoli to look for work,” she added.

Still, Ms. Hammoudeh insists that there are also reasons to be optimistic as the Al-Nour team shows, and she says that those who really want to find a solution and make a life for themselves can do it, with the help of UNHCR’s Community Centre and other stakeholders that provide assistance to the refugees.

The challenges faced by the UN’s humanitarian partners helping countries hosting large populations of Syrian refugees are complex. With close to a million people to feed outside Syria, and 2.5 million inside its borders, the World Food Programme needs $81 million to provide food through June.

Jordan, Turkey, Lebanon, and Iraq are hosting over 1.3 million Syrians. In early April, UNHCR stressed that aid efforts were being hobbled due to lack of funding, with only some $300 million received so far out of the requested $1 billion.

The work of UN aid agencies is a lifeline for refugee populations who otherwise would be without the basics of food, shelter and medicine – the injection of these funds also help host countries support large influxes of populations traumatized by war and unsure of return options.

The communities which end up hosting these refugees benefit from such support, given that many find their lives being disrupted by the presence of refugees, especially in poorer host communities.

“I’ve seen how people’s lives have changed, I met many women that came to Lebanon completely destroyed, without any hope,” said Ms. Hammoudeh. “But with our daily efforts, support and encouragement, I’ve witnessed the incredible resilience of people. If you heard the unimaginable hardships they have been through, the way that people are killed and women are abused; you would imagine that they would be totally unable to do anything after that. When you see them one year later, they are once again planning for their future, smiling and building something, and that makes me extremely happy.”

The football team has shown the way as an innovative means of building trust between the Syrian refugees and the local population. It increases mutual understanding and raises empathy levels, and restores an element of normalcy to people’s lives. According to UNHCR, “We need to use our resources to make this possible.”

On 15 April, the heads of five UN agencies issued a joint appeal for an urgent political solution to the crisis in Syria which has displaced more than 5 million people and called on political leaders to meet their responsibility to the people of Syria and to the future of the region. In the past few weeks, the agencies have separately warned that their resources are running low, and added that without additional funds they will be forced to scale back relief efforts.

With UN efforts to tackle the Syrian refugee crisis reaching a “breaking point” due to a massive shortfall in funds, aid officials have warned that the exodus of people fleeing the conflict to neighbouring countries could balloon to four million by the end of the year absent a political solution.