Syrian rebels say thanks, but no thanks to Jihad 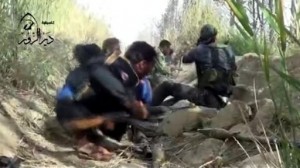 “We reject any presence of foreign fighters, regardless of where they are from. We have said that what we are missing in Syria is weapons, not men,” FSA political and media coordinator Louay Muqdad said.

“Our official position as the Supreme Military Command of the Free Syrian Army… is that we thank them but we reject any calls for jihad in Syria,” he added.

Thousands of foreign fighters have joined Syrian rebels pitted against the regime of President Bashar al-Assad.

Two Lebanese Salafist sheikhs have called on their followers to join rebels fighting in Syria and to support Sunni residents of the embattled central province of Homs.

Their calls come after Syria’s opposition and a monitoring group accused Lebanese Shiite movement Hezbollah of fighting in Homs alongside troops loyal to Assad’s regime.

In a speech on Monday, controversial Lebanese Salafist leader Sheikh Ahmad al-Assir announced the establishment of “free resistance battalions” in Sidon, the southern city where he is based.

“There is a religious duty on every Muslim who is able to do so… to enter into Syria in order to defend its people, its mosques and religious shrines, especially in Qusayr and Homs,” he told supporters.

Known for his hostility to Hezbollah, Assir said his call comes after Shiite group chief Hassan “Nasrallah and his shabiha (pro-Assad militia) have taken the decision to enter into these areas in order to massacre the oppressed people there”.