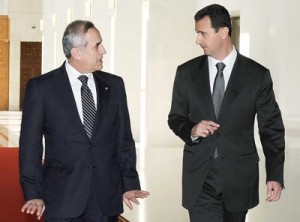 Lebanese President Michel Suleiman called on the Lebanese people Wednesday not to send arms shipments or fighters to the neighboring Syria and to abide by the dissociation policy.

Suleiman also called on different parties not to “establish any training bases in Lebanon,” according to a statement released by his press office.

He pointed out that the Lebanese should abide by the dissociation policy and not meddle in the Syrian affairs so as to safeguard the national unity and prevent any tension locally.

Lebanese authorities have officially followed the policy to distance the country from the Syrian conflict, but have been reluctant to publicly blame either government forces or rebel fighters for firing villages and towns near the border with Syria.

The Syrian conflict has fueled local tensions between the communities in Lebanon since March 2011, with lots of street clashes and kidnappings.