Iran: Assad should stay in office, run again in 2014 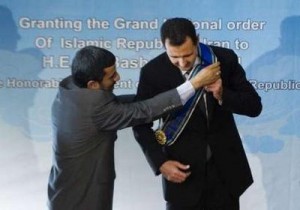 “We think the best scenario is for Mr. Assad to remain president of the republic until the summer of 2014,” said Aladin Borujerdi, head of parliament’s national security and foreign affairs commission.

“After that, free elections will be held and the Syrian people can express themselves and decide on their future,” he told a Damascus press conference after a meeting with Iran’s ally Assad.

He criticized neighboring countries which support rebels fighting to oust Assad, charging they were “seeking to deepen dissent and the crisis” in Syria.

Such countries, which he did not name, “must know that this crisis will end sooner or later and then only the bad policies of these states will stay behind in the memory of the Syrian people,” said Borujerdi.

His press conference came as Assad’s forces continued a major offensive in the suburbs against opposition fighters who were closing in on parts of Damascus.