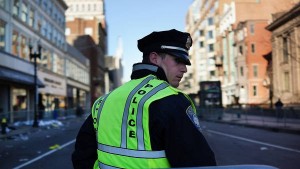 The explosives used to kill three people and injure 176 at the Boston Marathon on Monday were likely some kind of “pressure-cooker” devices that sent sharp bits of shrapnel flying into victims in the vicinity of the blast, several law enforcement officials said Tuesday.

Surgeons at several Boston hospitals told televised news conferences on Tuesday that the explosive devices had apparently been packed with small pellets and sharp “nail-like” objects that were designed to maim their victims.

The new details about the explosives emerged as President Obama announced at the White House that the F.B.I. was investigating the attack as “an act of terrorism,” but said that it was unclear if it had been carried out by an individual or a group, foreign or domestic.

Representative Michael McCaul, a Texas Republican who heads the House Homeland Security Committee, said the authorities believe that the explosives were similar to improvised explosive devices that have been used against American troops in Iraq and Afghanistan. Mr. McCaul, a former federal prosecutor who received briefings Tuesday morning from the Federal Bureau of Investigation and Homeland Security officials, also said that the authorities still did not know whether the attack was a foreign or domestic plot.

A law enforcement official said at least one and probably both of the bombs were pressure cookers filed with nails and ball bearings and black powder that were detonated with rudimentary “kitchen-type” timers. The official said investigators believe the bombs were hidden inside bags or backpacks and left on the street or sidewalk near the finish line.

A senior government official who had spoken with intelligence and law enforcement officials said Tuesday that there had been “no pre-attack chatter” detected by the government from members of Al Qaeda or other terrorist groups. In two intelligence briefings the official said he had received in recent weeks, there was “nothing was offered on this” type of attack.

The official said that the intelligence agencies had begun to go back and examine communications they intercepted in recent weeks to determine whether they had missed anything. “Before the 2009 Christmas Day bombing attempt, they thought there was no pre-attack chatter,” said the official. “But there had been, but it had not been interpreted. Everything is now being looked at.”

Rudimentary explosive devices made from pressure cookers have been widely used in attacks in Afghanistan, India, Nepal and Pakistan, all countries where the cooking device is common, according to a Department of Homeland Security warning notice issued in 2010. But they have occasionally turned up in attacks in the United States as well: Faisal Shahzad, an American citizen who tried a car-bomb attack on Times Square in 2010, included a pressure cooker loaded with 120 firecrackers in the collection of jury-rigged explosives in his vehicle. The devices smoked but never exploded.

Law-enforcement officials urged the public on Tuesday to share any video or photographs they had taken of the marathon or the blast.

F.B.I. agents, Boston police detectives, the state police and investigators from other agencies assigned to Boston’s Joint Terrorist Task Force were being assisted by an F.B.I. Evidence Recovery Team from New York and F.B.I. specialists from the bureau’s laboratory in Quantico, Va., who are expert in the handling of videos and photographs, a law enforcement official said.

“There is a tremendous volume of images that are being evaluated,” the official said.

Among the dead in Boston was an 8-year-old boy, Martin Richard, of Dorchester, according to Conor Yunits, a family spokesman. He had been watching the marathon with his family; his mother and a sister were badly injured.

Bill Richard, Martin’s father, released a statement on Tuesday in which he thanked people for their prayers and asked for privacy to grieve.

“My dear son Martin has died from injuries sustained in the attack on Boston,” he said in the statement. “My wife and daughter are both recovering from serious injuries. We thank our family and friends, those we know and those we have never met, for their thoughts and prayers. I ask that you continue to pray for my family as we remember Martin.”

The names of the other victims have not been made public.

Late Monday night, law enforcement officials descended on an apartment building in the suburb of Revere, about five miles north of Copley Square, linked to a man the police took into custody near the scene of the bombings. But on Tuesday morning, one law enforcement official said investigators had determined that the man, who was hurt in a blast and was questioned at the hospital, was not involved in the attack.

Law enforcement officials pleaded at a briefing Tuesday morning for anyone who took pictures or video of the finish line at the time of the blast to submit them to boston@ic.fbi.gov or to call 1-800-CALL-FBI (1-800-225-5324).

Police Commissioner Edward Davis said Tuesday morning that officials were gradually reducing the size of the crime scene, which on Tuesday stretched for 12 blocks in Copley Square, down from 15 blocks on Monday. He said it was the most complex crime scene in the history of the department.

Among the 17 critical injuries reported by police on Tuesday morning were at least two children. Boston Children’s Hospital on Tuesday said doctors were caring for a 10-year-old boy and a 9-year-old girl, both of whom were in critical condition with leg injuries. The hospital also had a 2-year-old boy with a head injury, who they said was in good condition. Children’s said it had already discharged seven other patients with injuries from the marathon, including one pregnant woman who was transferred to Brigham and Women’s Hospital.

Some colleges and universities in Boston counted their own students among the injured; many universities here convene their own teams for the Boston Marathon, whose members train and fund-raise together.

Emerson College, in downtown Boston, was closed on Tuesday, and its president, Lee Pelton, said seven students there were hospitalized with injuries, but all had returned to campus by Tuesday. Tufts University, in Medford, said it had three students with non-life-threatening injuries. One students from Boston University was reported injured, but in stable condition.

City streets that normally would be clogged at rush hour were largely deserted on Tuesday except for a cold wind and a few runners out for a morning jog. “It’s very surreal,” said Mary Ollinger, 32, who works at Wentworth Institute of Technology. “The streets are empty and the Common is filled with media trucks.”

At the morning rush hour, the city’s subway system was uncharacteristically quiet, watched over by a heightened police presence and SWAT team members. Parts of the city seemed to have ground to a halt: Stores on Newbury Street, Boston’s busy retail thoroughfare, were closed, and tables on the patio at Stephanie’s, a restaurant there, were still covered in dishes left there on Monday.

Metal barriers and more police guarded the crime scene, forming something of a black hole in a busy retail and business district in this city. Inside, the streets were still littered in the detritus of the marathon — runners’ blankets, water bottles, even a pile of bananas.

Hundreds if not thousands of office workers avoided the city on Tuesday because of the closures. Maria Luna, 38, who lives in Watertown and usually commutes by bus to her job as an investment analyst at John Hancock, said she was staying home. “My manager told me it would be very limited access,” she said by phone. The emergency protocol in her office was activated, she said, meaning that essential workers, like those who must move cash on a time-sensitive basis, could report to an off-site disaster recovery station in Portsmouth, N.H., where the company has computers.

She said she felt a combination of sadness and terror. “Right now I have a big ball in the pit of my stomach,” she said.

But many runners, clad in the blue and gold jackets given to this year’s marathoners, made pilgrimages to the blockade on Boylston Street, pausing to take pictures with their cellphones. Others came wearing jacket from previous marathons — the symbol of accomplishment had, apparently, turned into a sign of solidarity.

Alison Gardner, a runner from Austin, Tex., who completed the race on Monday about 10 minutes before the blasts, left a potted hydrangea and tucked a bunch of tulips into the metal barrier.

“It’s supposed to be a day of celebration today, and it’s a day of sadness,” said Ms. Gardner.

Her companion, Bonnie Yesian, is among many visitors still marooned in the city, because her hotel — and her luggage and identification — is inside the crime scene.

“I can’t fly, so I’m stuck,” said Ms. Yesian, who said strangers and marathon volunteers had offered her guest rooms and supplies in the meantime.

Marathon officials had set up an ad hoc site adjacent to the crime scene, where runners who had been stopped before the finish line could pick up their medals and bright yellow bags of belongings that they had left at the start. What would ordinarily be a moment to bask in accomplishment was a grim occasion, as runners — many with tears in their eyes — wondered what to make of a medal for a marathon they had been unable to complete.

“It’s heartbreaking to not cross the finish line, you train so hard for this,” said Lauren Field, an auctioneer who now lives in Hampstead, N.H., who was stopped blocks from the finish line. “It’s sad, but I’m safe.”

Caroline Burkhart protested gently as a volunteer handed her a medal. “I didn’t finish,” she said, explaining that she had stopped at mile 25.2. She took off the medal and examined it. “Memories,” she said, with a shudder. “Next year, I’ll wear it.”

In Dorchester, the street outside the home of Martin Richard, the 8-year-old victim, a large two-story gray Victorian with a basketball hoop and a hockey goal in the driveway, was filled with reporters and television cameras on Tuesday. Mourners stopped to leave flowers in the front yard. A neighbor, Jane Sherman, 64, described the Richard children as “very active, very normal American kids.” Ms. Sherman, a real estate agent, said she would often see the children outside the house playing. “They’re very happy-go-lucky kids,” she said. “All of Dorchester is devastated.”

White House officials said that President Obama received updates overnight about the investigation from Lisa Monaco, his chief counterterrorism and homeland security adviser. “The president made clear that he expects to be kept up to date on any developments and directed his team to make sure that all federal resources that can support these efforts, including the investigation being led by the F.B.I., be made available,” a White House official said. Mr. Obama is to be briefed again later this morning by Ms. Monaco and the director of the F.B.I., Robert Mueller.

Almost three-quarters of the 23,000 runners who participated in the race had already crossed the finish line when a bomb that had apparently been placed in a garbage can exploded around 2:50 p.m. in a haze of smoke amid a crowd of spectators on Boylston Street, just off Copley Square in the heart of the city. Twelve seconds later, another bomb exploded several hundred feet away.

On Tuesday morning officials said that the only explosive devices found were the ones that exploded at the marathon — clarifying conflicting statements that were given Monday in the chaotic aftermath of the blast, when some law-enforcement officials had said that other devices were found. “There were no unexploded devices found,” Gov. Deval Patrick said Tuesday morning.