U.S. is secretly feeding the Syrians 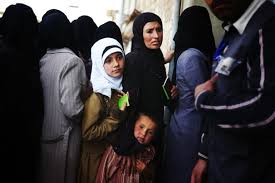 ALEPPO, Syria — In the heart of rebel-held territory in Syria’s northern province of Aleppo, a small group of intrepid Westerners is undertaking a mission of great stealth. Living anonymously in a small rural community, they travel daily in unmarked cars, braving airstrikes, shelling and the threat of kidnapping to deliver food and other aid to needy Syrians — all of it paid for by the U.S. government.

So secretive is the operation, however, that almost none of the Syrians who receive the help are aware of its American origins. Out of concern for the safety of the recipients and the delivery staff, who could be targeted by the government if their affiliation to the United States were known, the Obama administration and the aid workers have chosen not to advertise the assistance.

Meanwhile, as the death toll mounts and the regime led by President Bashar al-Assad shows no sign of giving up, anger about the perceived failure of the United States to help mounts steadily among Syrians who support the rebellion.

“America has done nothing for us. Nothing at all,” said Mohammed Fouad Waisi, 50, spitting out the words for emphasis in his small Aleppo grocery store, which adjoins a bakery where he buys bread every day. The bakery is fully supplied with flour paid for by the United States. But Waisi credited Jabhat al-Nusra — a rebel group the United States has designated a terrorist organization because of its ties to al-Qaeda — with providing flour to the region, though he admitted he wasn’t sure where it comes from.

“If America considers itself a friend of Syria, it should start to do something,” he said.

The unpublicized aid effort, which The Washington Post was invited to witness on the condition that it not identify the agency involved, the names or nationalities of its staff, or the precise locations in which the workers operate, illustrates the dilemma confronting the Obama administration as it cautiously explores ways of stepping up support for the Syrian opposition.

The United States is already providing a significant component of the humanitarian aid reaching Syria. It has contributed an overall total of $385 million, according to USAID officials. Overall, international donors have matched only a third of the funds promised, and the amount remains woefully insufficient to meet the spiraling needs of a war-ravaged country whose people are killed, injured and forced to flee their homes on a daily basis, U.N. officials say.

The U.N. mission, based in Damascus, faces difficulty accessing rebel-held areas of the country because of government-imposed restrictions and the dangers of crossing the front lines. To circumvent the shortfall, the United States has earmarked $90 million of its contribution for nongovernmental organizations to operate in rebel areas, making it the largest Western donor of aid to the parts of Syria that have slipped beyond government control.

Syrians “say they’re not getting any help, and it frustrates us because they are,” said a U.S. official involved in the aid effort who was not authorized to speak publicly on the subject.

Syrians who are aware of the American contributions in Aleppo say the discreet efforts of the U.S.-funded aid agency have made a difference in the areas it targets.

Flour purchased by the United States helps feed 210,000 people a day and has helped resolve the acute shortage of bread that threatened the province with famine last winter, aid workers said. Extra food rations have been distributed to more than 400,000 people, and 168,000 people sleep under U.S.-provided blankets, the aid workers said.

The United States also funds 144 field hospitals and clinics that treat injured Syrians across the country, and it provides 90 percent of all medical aid reaching rebel areas in one province where fighting has increased sharply in recent months, according to an official with the U.S. Agency for International Development who spoke on the condition of anonymity because of the sensitivity of the issue.

The United States is not the only country providing help to the province of Aleppo. Turkey has given by far the most aid overall, and the French agency Medecins Sans Frontieres (Doctors Without Borders) runs clinics there.

But among Western donors, “there is no doubt that America has taken the lead,” according to Wissam Tarif, who oversees the provision of aid for the Syrian Opposition Coalition. “And for the U.S., it shows courage to be pushing organizations to operate in this area.”

Yet because of security concerns, the United States can’t advertise its successes, undermining what has always been regarded as one of the goals of American aid: to win hearts and minds.

“America is our number one enemy,” fumed Ali Mahmoud al-Kak, 43, an unemployed taxi driver, as he bought bread at another of the Aleppo bakeries supplied entirely with flour paid for by the United States.

It is unclear whether raising awareness of U.S. aid contributions would make a difference. Syrians who support the opposition want weapons and a no-fly zone to deter government airstrikes more than they want food or medicine, said Abu Omar, who heads the relief committee in a provincial Aleppo town that receives American food aid. As the person responsible for distributing the food, he knows it comes from the United States, but the aid agency told him not to tell anyone.

“Yes, America helped us a lot with food. But we blame them because they are a great power,” Abu Omar said. “We are enduring airstrikes and shelling daily, and they have done nothing about it.”

Meanwhile, Jabhat al-Nusra, which last week publicly confirmed its allegiance to al-Qaeda, is receiving much of the credit for the help Syrians are receiving. The road leading into the town where Abu Omar distributes American-bought food is lined with black banners advertising the militant organization’s presence. As the daily distribution of food got underway in one part of town, Jabhat al-Nusra was delivering water supplies in another.

At the site of the U.S.-funded distribution, men lined up to receive boxes of tuna, pasta, beans, rice and other items — rations intended to feed a family of seven for a month — said that they knew a foreign country was providing the help but that they did not know which one. One man suggested Britain or France, another Turkey. Most said Qatar was the most likely benefactor, or perhaps Saudi Arabia.

“We really don’t know, and nobody asks,” said Wasil Khaled, 31, an unemployed day laborer. Jabhat al-Nusra does not provide organized distributions on the scale of these regular food handouts, he said, “but if there is an emergency, they help. They are doing a very good job.”

That the United States is giving humanitarian aid to Syria is no secret. Although the issue of whether to provide military help to Syrian rebels is highly controversial, food and medical contributions have been mentioned repeatedly in U.S. statements on Syria.

Addressing a U.N. fundraising conference by video in Kuwait in January, President Obama made it clear that the origins of the aid would not be publicized.

“The relief we send doesn’t say ‘Made in America,’ ” he said.

The administration is looking at ways of branding the aid but has not figured out how to safely do so, said Nancy Lindborg, assistant administrator for the Bureau for Democracy, Conflict and Humanitarian Assistance at USAID.

“We know that if we put the aid workers in even greater danger, there is a possibility that we’ll have deaths among our aid workers,” she said.

The risks are evident. Three U.S.-funded clinics were hit by mortar fire last month, and one of the strikes killed 10 people, although there is no reason to believe they were targeted because of their U.S. affiliation, which has been kept quiet, American officials said.

But if one were, and if the U.S. link were known, the entire effort to feed people in the province would be jeopardized, said one of the program officers with the aid agency that supplies the bakeries.

“I’m not concerned about the image issue. I’m concerned about helping people, and I also want to go home to my wife,” the program officer said at the rented apartment where the aid workers live, without telling neighbors who they are.

At a school serving as housing for families forced to flee to one of the towns being helped by American aid, the depth of need is apparent. More than 200 people are crowded into classrooms, where they sleep on U.S.-provided mats, mattresses and blankets and are sustained almost entirely by the U.S. food baskets distributed by the agency.

There is no water, many children are sick, and everyone has a story of bereavement, horror and fear.

“Without this, we would be close to death,” said Amina al-Ibrahim, a grandmother, gesturing toward the box of food she had received the day before. She does not know who sent it. But, she said, “I would really like to know, so that I could tell them thank you.”

Since the conflict began in 2011, the United States has contributed the largest share, 25 percent, of global aid to Syria. Despite promises of assistance, some nations have yet to follow through.