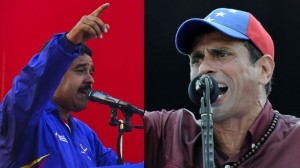 Henrique Capriles, has refused to accept the results of Sunday’s presidential election in Venezuela until votes are fully audited.

According to Venezuela’s National Electoral Council, Capriles, the opposition candidate, obtained 49 percent of the votes this weekend. That means he lost to government candidate Nicolas Maduro by just 1.5 percentage points.

Capriles claimed there had been hundreds of violations at voting stations across Venezuela on Sunday and asked for a full recount of the votes before he would accept defeat.

“I am a democrat and a fighter who has always respected the will of our people. That is why I am making this request,” Capriles said at a press conference that took place after election results were announced.

The dispute over election results will surely heighten political tensions in Venezuela where the voter difference between the candidates was a mere 230,000 votes.

Capriles supporters said that they were tired of electoral “abuses” by government candidates like Maduro, whose campaign was backed by the national oil company the state-run tv channel and other public companies. Many voiced their agreement with Capriles’ decision to ask for a recount.

“You’re a real leader, you are my president” said Twitter user Andrea Tovar, who wrote her message under the trending hashtag #laluchacontinua, or the “struggle continues.”

Still, Maduro blasted any notion of fraud, claiming that Venezuela’s electoral system was “flawless.” He labeled Capriles a sore loser.

“My victory is legitimate….even if I would’ve lost by one vote, I would’ve accepted the result,” Maduro said as he spoke to thousands of his supporters after results were announced.

Maduro also vowed to “strengthen,” Hugo Chavez’s socialist revolution, which vies to keep key industries in the hands of the Venezuelan state. He even encouraged the creation of socialist communes that will run their own courts and administer social programs that are currently managed by local governments.

Even if Maduro is confirmed the winner after a recount, experts say that his ability to govern will be weakened by this narrow victory. Just three weeks ago many polls in Venezuela suggested that he would win the election by 15 to 20 percentage points.

“He will have to negotiate [with the opposition] in order to reach stability,” Venezuelan political analyst Luis Vicente Leon wrote on his Twitter account.

Leon says that in order to solve such issues Maduro will have to reach agreements with Venezuelan companies and some sectors of the country’s opposition.

Maduro, who was personally endorsed by Hugo Chavez, will also be under pressure from those who voted for him and expect solutions to their daily problems.

“Maduro does not have the charisma that Chavez had, which enabled him to ask the masses to postpone their requests,” Leon said in a conference with investors last Wednesday.

“People will ask things from Maduro and will want quick results. They don’t know how long he will last [as Venezuela’s leader]… and his links with the population are just being built.”