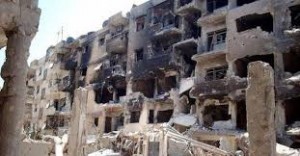 Syrian government forces launched a counteroffensive in the south, capturing a town and killing at least 45 people including women and children, opposition activists said Thursday.

The attack on the town of Sanamein followed a rebel advance in the area in recent weeks. The opposition fighters captured army bases and a major town in the strategic province of Daraa along the border with Jordan.

“They slaughtered any person they found,” an activist in the nearby town of Busra al-Harir who goes by the fake name of Hamza al-Hariri told The Associated Press via Skype. He would not give his real name for fear of government reprisals.

“This is the ugliest massacre since the one in Houla,” he added, referring to a region in the central province of Homs where more than 100 civilians were killed by government forces in May last year.

Rebels advancing in the south in recent weeks have been aiming to secure a corridor from the Jordanian border to Damascus about 60 miles away in preparation for an eventual assault on the capital.

Regional officials and military experts note a sharp increase in weapons shipments to opposition fighters by Arab governments, in coordination with the U.S., in the hopes of readying a push into Damascus — the ultimate prize in the civil war that has killed more than 70,000 in two years.

State-run Syrian TV said the armed forces “wiped out terrorist groups” in Sanamein and the nearby town of Ghabagheb. It added that troops were targeting rebel hideouts in different parts of Daraa. They included the villages and towns of Tafas, Jasssim, Dael and Tseel and the report said they had inflicted casualties in those areas.

The city of Daraa, the provincial capital, was the birthplace of the uprising against President Bashar Assad in March 2011

The Britain-based Syrian Observatory for Human Rights activist group reported clashes on Thursday in the city of Daraa and said there were casualties among regime troops.

State-run Syrian TV said government forces killed or wounded dozens of gunmen in the city of Daraa, including foreign fighters.

The Observatory said at least 45 people, including five children and seven women, were killed in the attack on Sanamein. It said they were killed by “shooting, shelling and field execution,” a reference to people reported to have been shot at close range.

The Syrian National Coalition, the main opposition group, said more than 60 people were “brutally” killed in the town. After troops stormed Sanamein, the group said they used some civilians as human shields and took others as hostages before looting some homes.

The differing death tolls could not be reconciled.

The SNC said the regime carried out the attack in Sanamein after it failed “to stop the operation to liberate the province of Daraa, the southern entrance to Damascus.”

In addition to the stronghold in the north, rebels have also captured parts of the east along the border with Iraq recently. But the strategic region between the southern outskirts of Damascus and Jordan — known as the Houran plains — is seen as a crucial gateway to the capital.

Dozens of rebel units have carved out footholds in areas to the east and south of the capital, and use their positions there to fire mortar shells at the heavily guarded city.

“The regime is trying to score a victory in Daraa and send an internal and external message,” said Rami Abdul-Rahman, who heads the Observatory.

Al-Hariri, the activist from the nearby town, said the attack on Sanamein began at 5 a.m. Wednesday with intense shelling. About five hours later, troops began advancing into the town and clashing with rebels, he said.

He said he had a list of 48 names of the dead as well as about 20 who have not been identified yet.

By nighttime, troops were in control of the whole town, he said.

An amateur video posted online showed 15 bodies covered with sheets, some with their faces covered with blood. The dead included four children and a woman.

“These are the bodies that we have been able to collect so far,” said a man wearing a black Islamic headband and an opposition flag around his neck.

The video appeared genuine and corresponded to other AP reporting on the events depicted.

Activists also reported clashes and shelling Thursday in the central province of Homs, Deir el-Zour in the east and Raqqa, Aleppo and Idlib provinces in the north. They said rebels shot down a helicopter carrying food and supplies to an army base near the northwestern town of Maaret al-Numan, killing the pilot and three other soldiers.

Also Thursday, Syria’s Foreign Ministry complained to the United Nations and the U.N. Security Council about al-Qaida’s activities in Syria, saying that Damascus has been fighting the group for two years.

The Syrian government denies there is an uprising and says it is fighting terrorists carrying out a foreign conspiracy.

The letter came a day after the leader of the most formidable rebel group in Syria pledged allegiance to al-Qaida but distanced himself from a claim that his Islamic extremist faction had merged with the terror network’s Iraqi branch.

Al-Qaida in Iraq said Tuesday that it had joined forces with Jabhat al-Nusra or the Nusra Front — the most effective force among the disparate rebel factions fighting to topple Assad. It said they had formed a new alliance called the Islamic State in Iraq and the Levant.

In other developments, U.S.-based Human Rights Watch accused Syria of committing war crimes by indiscriminate and sometimes deliberate airstrikes against civilians, killing at least 4,300 people since the summer.

The regime’s air power is its biggest advantage in the civil war, helping to repel rebel advances on Damascus and to prevent a rival government from setting up in the northern stronghold.