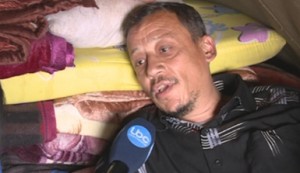 A number of Palestinian refugees who fled the war raging in Syria and headed to Lebanon, staged a hunger strike outside the UNRWA ( UN Relief and Works Agency for Palestine Refugees) headquarters in Beirut. They demanded to being treated humanely and to be granted their simplest rights: food, refuge and health care, LBC reported on Thursday . .

The refugees assembled near the refugee camps in Beirut and South Lebanon and then staged demonstrations calling on the international community and the UN to “meet the just demands of the refugees.”

Lebanon is facing difficulties dealing with the increasingly high number of Syria refugees on its soil, which prompted its cabinet to address the issue in a meeting last month.

Moreover, the severe funding shortage over the Syrian humanitarian crisis is a major concern for the United Nations, with UNICEF facing a 57 percent funding gap in its Lebanon program for Syrian children, and other agencies seeing similar problems.

Lebanon a country of four million is now home to more than 1 million Syrians and half a million Palestinians, according to media reports