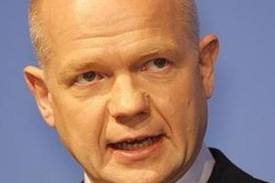 British Foreign Secretary William Hague has said the crisis in Syria will be at the “top of the agenda” when G8 foreign ministers meet in London this week.

He has warned that the “situation in Syria continues to get worse”.

Mr Hague said that top of his “personal agenda” is another initiative, to end a “culture of impunity” over sexual violence and abuse during war.

Foreign ministers from the G8 nations are starting two days of talks in London before the G8 summit in June.

Mr Hague will meet with the foreign ministers of Canada, France, Germany, Italy, Japan, Russia and the United States, on Wednesday and Thursday.

The G8 summit itself is due to take place at Lough Erne, Northern Ireland, in two months’ time.

The Foreign Secretary said the recent escalation of tensions between North Korea and South Korea will also be discussed at the meetings.

“What we’re talking about is preventing conflict, resolving conflict, dealing with its consequences”, Mr. Hague said.

He added that he will also use the talks to further the “preventing sexual violence initiative”, which addresses the prevalence of sexual abuse in conflict zones.

He said that the initiative, supported by a range of United Nations bodies and non-governmental organisations including Save the Children, “requires a lot of international agreement and unity”.

Other topics of discussion in London will include encouraging international financial institutions to re-engage with Somalia and building greater trust and security in cyberspace.

Also working with governments that are in transition in the wake of theArab Spring and promoting international investment in Burma.