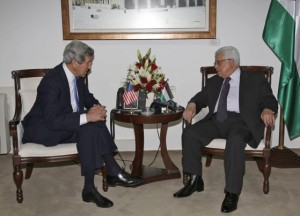 US Secretary of State John Kerry worked Monday to corral Israeli and Palestinian leaders into a new and ambitious peace process that includes reviving parts of a long-dormant plan embraced by the Arab world a decade ago, officials said.

The 2002 initiative that Kerry wants to revive parts of would have provided Israel recognition throughout the Arab world in exchange for a pullout from territory conquered in 1967.

On his third trip to Jerusalem in the last two weeks, Kerry committed himself to a multi-month peace push that could mean numerous follow-up trips to the region. He met with Israeli Prime Minister Benjamin Netanyahu and other senior Israeli and Palestinian officials Monday, a day after sitting down for private one-on-one talks with Palestinian President Mahmoud Abbas in Ramallah.

“I am intensely focused on this issue and the region because it is vital really to American interests and regional interests to try and advance the peace process and because this festering absence of peace is used by groups everywhere to recruit and encourage extremism,” Kerry told reporters.

“Both sides mistrust each other deeply and there are reasons that mistrust has built up,” he added. “I am convinced that we can break that down.”

Kerry’s foremost goal is to restart direct Israeli-Palestinian peace talks that have hardly taken place at all over the last 4½ years. And, in a break from previous American-led efforts, he also wants to focus on a modified version of the 2002 Arab Peace Initiative.

The initiative was revolutionary when Saudi Arabia introduced it and the 22-member Arab League endorsed it. It offered Israel comprehensive recognition in exchange for withdrawal from the lands it conquered in the 1967 Mideast war.

Although Israel never embraced the plan and the Palestinians oppose any changes to it, the basic parameters seem to be gaining traction as a framework for future talks between the Israelis and Palestinians. Arab League chief Nabil El-Araby and Qatar’s prime minister will lead a delegation to Washington this month to discuss the initiative with Kerry, Arab officials said.

Kerry, however, is seeking new conditions to sweeten the deal for Israel, officials said. Arab and Palestinian officials say he has talked about upgraded guarantees for Israel’s security and allowances for border adjustments based on mutual agreement.

A senior State Department official would only say Kerry wanted the plan “enhanced.” The American official spoke on condition of anonymity because of Kerry’s orders not to brief reporters.

Earlier Monday, Kerry told U.S. consulate staff in Jerusalem that he was coming so regularly to the Mideast because he believed peace could be reached. “If we can get on a track where people are working in good faith to address the bottom-line concerns, it is possible to be able to make progress and make peace,” he said.

Among the countless peace plans and confidence-building strategies devised for Israel and the Palestinians over the years, the Arab League’s initiative was one of the quickest to be dismissed. It was overshadowed by fierce Israeli-Palestinian fighting at the time and Israel has never softened its objections to the 1967 lines, which it sees as indefensible.

There is also a spiritual component. For Israel, returning to its old borders would mean a withdrawal from east Jerusalem, home to the city’s holiest Jewish, Muslim and Christian religious sites

Winning Netanyahu’s support will be difficult. He sharply clashed with President Barack Obama two years ago when the American president publicly endorsed the 1967 borders as the basis of a two-state solution. While Netanyahu has described the Arab peace initiative as a welcome sign of acceptance, he has refused to accept its take-it-or-leave it conditions.

The Palestinians, too, don’t want to make new concessions. They’ve won a score of diplomatic victories over the last year, including recognition as a non-voting member state of the United Nations and as full members of other multilateral institutions, and feel international support of their cause is growing.

The chief Palestinian negotiator, Saeb Erekat, said Kerry has been floating the Arab initiative as a possible way out of the deadlock but that it could not be changed. “Kerry asked us to change a few words in the Arab Peace Initiative but we refused,” he told the Voice of Palestine radio station on Sunday.

Abbas left Monday for talks on the plan at an Arab League meeting in Qatar. There, a special committee was holding an “urgent meeting” on the subject, said Mohammed Subeih, the Arab League’s undersecretary for Palestinian affairs. Qatar’s prime minister chaired it and the foreign ministers of key countries such as Egypt, Saudi Arabia, Jordan and the Palestinians participated.

Israel, whose officials refused to comment on the matter, took control of the West Bank, east Jerusalem, Gaza Strip, Sinai and Golan Heights in the 1967 war. It returned the Sinai to Egypt in 1982 as part of a peace treaty and pulled out of Gaza unilaterally in 2005. Israel annexed the Golan Heights in 1981 and peace talks with Syria over the territory have repeatedly failed.