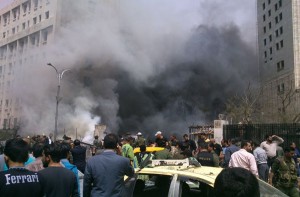 An explosion tore through central Damascus on Monday and government accounts said a car-bomb had killed 15 people in a blast that rattled windows, spread chaos and sent billows of dark smoke over an area that had been packed with people forming lines at banks, insurance companies and cellphone outlets.

As ambulances pushed through the crowd, hundreds of people streamed away and others in the Syrian capital called families and relatives to check whether they had been close to the explosion. State television, which also said 54 people were wounded, showed upturned cars blackened by the blast as smoke blotted out the sky in the vicinity of the explosion. Fire crews could be seeing playing jets of water onto nearby high-rise buildings and at least one body was visible under the wreckage of a car.

The bomb appeared to have exploded inside the gates of the Central Bank parking lot, destroying an outer building and shattering windows of two large office buildings. People appeared in a glassless window several floors up inside one of the buildings, peering down silently at mangled, blackened cars, destroyed shops across the street, and swarming emergency workers.

No group immediately claimed responsibility for the attack, which brought the country’s two-year-old revolt close to the heart of the city.

Reuters quoted an unidentified resident of the capital as saying the explosion was the biggest she had heard in Damascus, where rebels on the outskirts have been harrassing government forces for months.

Another resident, who spoke in return for anonymity, said the explosions happened near a secondary girls’ school called Al Bukhariya, and had left students fainting and wounded. The bomb had been planted despite the presence of six government check-points supposed to guarantee security in the area, the resident said. “It is really a strong military base,” the resident said.

The Syrian Observatory for Human Rights, an opposition group based in Britain, had initially put the death toll at eight and said the explosion had been caused by a booby-trapped car near a square close to the Central Bank. “There are casualties and buildings and cars in the area of the explosion had sustained damage,” the Observatory said.

As early details emerged, SANA, the state news agency, quoted a reporter as saying “terrorists blew up a booby-trapped car in a crowded area near a school and a hospital, claiming the lives of many people and injuring others.”

The bombing followed claims by the authorities to have cleared the Eastern Ghouta area close to Damascus of rebels who are fighting to overthrow President Bashar al-Assad. The blast came a day after the beleaguered government forces sought to push back against insurgents in many parts of the country, according to opposition activists.

Fighting intensified in and around Aleppo, the country’s largest city, after government forces regained control of Aziza, a village near the city’s military airport, following weeks of clashes, the reports said on Sunday.

According to the Syrian Observatory for Human Rights, the rebels in the village ran out of ammunition and were forced to withdraw. The village sits on high ground commanding the road between the military airport and the city.

Syrian warplanes hit Aleppo in the north, Latakia on the Mediterranean coast, the eastern province of Deir Ezzor and other locations in an apparent effort to counter recent territorial gains by the rebels, the activists said.

In The Hague, meanwhile, Ban Ki-moon, the United Nations Secretary General, said all serious claims about the alleged use of chemical weapons should be investigated, news reports said.

The extent of any inquiry has fueled differences between Western countries supporting the rebels and Russia, Mr. Assad’s main overseas backer.

Mr. Ban said an advance team of inspectors was in Cyprus, Reuters reported, able to deploy within 24 hours if the Syrian authorities offered access.