How Lebanon dodged the Arab Spring 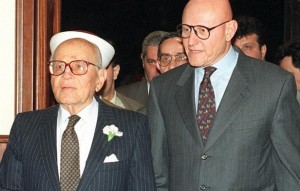 The Middle East, you may have noticed, has been an inhospitable place over the past several years for family dynasties. Egyptians revolted when it became increasingly obvious that Hosni Mubarak would attempt to pass the presidency off to his son, Gamal. Syrians are fighting a bloody war to rid themselves of Bashar al-Assad, another second-generation ruler. The wealth and power of Zine el-Abidine Ben Ali’s family was a rallying cry for the revolution in Tunisia, and Yemenis are still focused on wresting away important military positions from the sons of deposed President Ali Abdullah Saleh.

But there is one nominally democratic Arab country where the tradition of politics as a family business is alive and well: Lebanon. And with Tammam Salam, the son of former Prime Minister Saeb Salam, expected to be nominated for the premiership as a consensus candidate, Beirut will welcome another dynasty into the fold.

It’s a great irony: In the one Arab country where citizens could legally and peacefully rid themselves of second- and third-generation leaders who rose on little but their last name, they choose not to do so. There are a lot of reasons for that, related to Lebanon’s peculiar political system and its precarious domestic peace — but one key reason is the families themselves have proven incredibly politically flexible.

Take Lebanon’s newest scion, Tammam Salam. His father Saeb was a Sunni leader in Beirut during the 1950s, and something of a radical — he was enamored of Egyptian President Gamal Abdel Nasser’s vision of pan-Arab unity, a staunch opponent of U.S. and British influence in the Middle East, and a critic of the Christian community’s domination of Lebanese politics. He joined an armed rebellion against the government in 1958, and established control over the Beirut neighborhood of Basta. He was “smooth as oiled silk,” according to a U.S. State Department cable from the time, and showed off his arsenal of machine guns to the U.S ambassador when he came visiting, boasting “the Basta has the best.”

The United States, it goes without saying, hated Saeb Salam. The U.S. embassy in Beirut was quick to squash a suggestion that a covert deal could be reached with him. “No touch with that morally slimy rug merchant could ever be discreet enough,” reads a cable from May 1958.

Today, the Salam political dynasty lives — even as the political beliefs it upholds bear no resemblance to those it held in the previous era. Tammam Salam is the very image of moderation, winning the support of anti-Assad and pro-Assad Lebanese parties alike. It’s a neat trick: The times may change in Lebanon, but the faces remain the same.