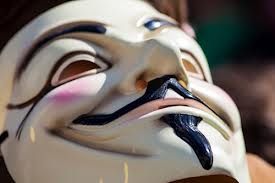 Hacktivist group Anonymous has launched its second massive cyber attack against Israel. The collective threatens to “disrupt and erase Israel from cyberspace” in what they have dubbed “the largest internet battle in the history of mankind.”

Dozens of Israeli websites were unavailable as of early Sunday.

In the statement released Saturday, an Anonymous affiliated group identifying itself as The N4m3le55 cr3w announce they “have gathered 600 websites and 100 plus servers we will be attacking” throughout Israel. The list includes banks, schools, businesses and a host of prominent government websites.

“That is just our targets,” the group warns. “We cannot speak on what the rest of Anonymous will be attacking but we can guarantee it will be in the 1000′s.”

“Expect us to have great lulz Avigdor Liberman and Yair Lapid, especially on social networks,” the statement reads.

The massive cyberattack falls on the eve of Holocaust Memorial Day. Anonymous has accused the Israeli government of mistreating its own citizens, violating treaties, attacking its neighbors, threatening to shut down the Internet in Gaza and ignoring “repeated warnings” about human rights abuses.

“The estimations are that [the cyber-attacks] will reach an unusual level that we have never seen before,” Deputy Information Security Officer Ofir Cohen said in an e-mail sent to Knesset employees on Thursday, The Jerusalem Post reported.

Cohen added that the E-government – the Israeli government’s information security body – and the Knesset’s internet service provider (ISP) are working to block the attack.

On Wednesday, thousands of Israeli Facebook users were infected by a virus, although its effects at this point appear to be minimal.

On Friday, Israeli radio reported that scores of large organizations had closed their websites to shield them from hacker attacks.

Despite the impending threat, Lior Tabansky, a fellow at the Yuval Ne’eman Workshop for Science, Technology, and Security of Tel Aviv University, told the Times of Israel that distributed denial of service (DDos) attacks, which work by overwhelming targeted servers with traffic which stems from multiple systems, are the only tool at the hackers’ disposal.

“Unless they have names and passwords, [DDoS] is really their only attack strategy. Unfortunately, there is little a company can do to stop it, but it is not the major cyber-threat many people, especially in the media, believe it to be. It’s more of an annoyance, and if they do manage to intimidate sites into submission, the victory will be one of public relations.” However, other experts have warned that the hackers may attempt to deploy malware such as “Trojan horses”, which can steal information and harm host computer systems.

Some 700 Israeli website suffered repeated DDos attacks, which targeted high-profile government systems such as the Foreign Ministry, the Bank of Jerusalem, the Israeli Defence Ministry, the IDF blog, and the Israeli President’s official website.

The group also took part in an attack in which the details of some 600,000 users of the popular Israeli email service Walla were released online.