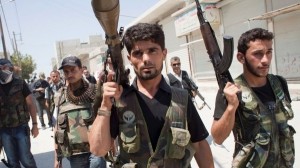 The United States and Jordan have stepped up training of Syrian opposition forces that may be used to establish a buffer zone along Syria’s southern border, according to U.S. and Jordanian officials.

Training begun last year has been expanded and accelerated after rebel gains in the south, including capture of a stretch of the Jordanian-Syrian border near the Golan Heights, two military outposts and the country’s main border crossing with Jordan.

Jordanian security officials said a previous timetable to complete training of about 3,000 Free Syrian Army officers by the end of June has been moved up to the end of this month in light of the border victories.

Creation of a buffer zone would aim to convert areas now in rebel hands into permanent havens for thousands of army defectors and displaced civilians in the area and allow easy access for humanitarian aid. More than 470,000 Syrian refugees have already crossed into Jordan — a number U.N. officials expect to pass the 1 million mark this year.

Officials from the United States and Jordan cautioned that implementation of the zones has not been set in motion and listed several stumbling blocks, including the ongoing refusal of the United States and other international backers to provide air cover to prevent Syrian President Bashar al-Assad’s air force from attacking rebel outposts.

Two years after the start of the Syrian conflict, Western and Middle East governments are struggling to devise an effective strategy they can agree on, even as the war appears to be spinning beyond their ability to influence it, short of the direct intervention they have refused to contemplate.

But the officials cited growing concern that moderate rebel forces, who have fought effectively in the south and around Damascus, would be overtaken by extremist Islamic fighters who have become dominant in northern areas under rebel control.

“The last thing anyone wants to see is al-Qaeda gaining a foothold in southern Syria next to Israel. That is a doomsday scenario,” said a U.S. diplomat in Jordan who was not authorized to speak publicly on the subject.

The Obama administration and regional governments fear the fighting may soon spill over into other countries.

“Buffer zones on the Syrian side of the border is the only way to keep the conflict away from Jordan,” said Mahmoud Irdaisat, head of the Amman-based Center for Strategic Studies at the King Abdullah II Defense Studies Academy.

The Obama administration, which sent a force of about 150 U.S. military personnel to Jordan last year, has repeatedly refused to comment on reports that the force is training Syrian fighters. 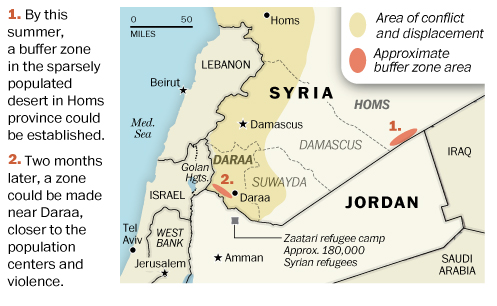 Among the options under discussion, Free Syrian Army forces would attempt to establish a rebel zone in May in the sparsely populated southeastern desert where Syria borders Jordan and Iraq, an area that has seen little fighting throughout the conflict.

After an initial two-month pilot phase, the rebels would move farther to the west near the city of Daraa, which has been a flash point for violence and is home for tens of thousands of displaced Syrians.

Rebel officials who say they have taken part in the U.S.-Jordanian training at a Jordanian military base say they are being prepared to maintain the zones using surface-to-air missiles and heavy artillery without military invention from outside forces.

“The Free Syrian Army will be expected and ready to control and administer Syria’s liberated zones,” said Mohammad al Damashqi, an FSA officer. “We have been told not to count on international forces or even a no-fly zone.”

Although rebel videos have shown Syrian aircraft being shot down, and opposition forces have claimed to have shoulder-launched missiles in their arsenal, it is unclear whether the weapons exist and, if so, where they came from.

Obama administration officials have expressed repeated concern that some of about 20,000 of the weapons, called MANPADS, have made their way from the arsenals of former Libyan dictator Moammar Gaddafi to Syria.

The administration has acknowledged that Persian Gulf countries, including Saudi Arabia and Qatar, are supplying weapons to the Syrian rebels, and it has helped vet the recipients. But it has repeatedly expressed concern that adding surface-to-air missiles to their arsenal would risk putting the weapons in the hands of militants and pose a threat to Israel and other nearby countries.

Fears over rebel inability to provide border security were realized within hours after they seized territory along the Golan border with Israel last month, when gunmen opened fire on Israeli patrols. It was not immediately clear whether the shots were fired by Syrian government troops or rebel fighters. A mortar shell fired from Syria landed in the Israeli-held Golan Heights on Tuesday, and there was further gunfire, the Web site of Israel’s Haaretz newspaper reported.

Meanwhile, growing public frustration in Jordan over the economic burden of hosting the Syrian refugees is pushing the government in Amman to look for solutions. Last week, members of the Jordanian parliament demanded closure of the country’s border with Syria and establishment of buffer zones to curb the flow of future refugees.

“By the end of the year, up to 20 percent of Jordan’s population will be Syrian,” said Jamil Nimri, a Jordanian lawmaker and a leading advocate for the zones. “It’s not one of the potential solutions available — it has become the only realistic solution to avoid a larger crisis in Jordan.”

Jordanians favoring the zones say they could eventually be turned over to international monitors or U.N. peacekeepers to prevent the areas from becoming havens for radical forces.

“From a security standpoint, we would all prefer U.N. forces rather than the Free Syrian Army patrolling these zones,” said a Jordanian general.

Despite growing enthusiasm, it may be too late to separate moderates from radicals among those fighting in southern Syria.

“Whether we fight under the banner of Jabhat al-Nusra or the Free Syrian Army, we are all defending our families in the name of God,” said Abu Momen, who crossed the border last week along with the nightly influx of about 2,000 people. The 22-year-old said he was a fighter with the Jabhat al-Nusra group, which the Obama administration has said is a wholly owned subsidiary of al-Qaeda in Iraq.

“No buffer zone can stop our jihad in Syria,” Abu Momen said.