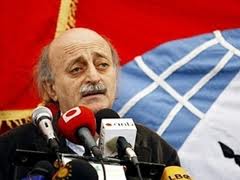 The Progressive Socialist Party (PSP) which is headed by MP Walid Jumblatt announced Monday the list of its candidates for the upcoming parliamentary elections.

PSP Secretary-General Zafer Nasser announced that seven PSP members had completed and signed their candidacy applications. The list is as follows:

The districts are based on the 1960 electoral law

Nasser said during the announcement that the 1960 law was still valid and stressed the need to hold the elections on time.

Notably absent from Jumblatt’s list is the minister of public works and transportation MP Ghazi Aridi, a key PSP member.

“Small amendments might be made to the current 1960 celectoral law… Some [parliamentary] seats might be moved from one district to another, including [moving] the Druze seat from Beirut to Aley,” NOW quoted PSP sources as saying on Tuesday.

Also absent from the list are the following 2 positions

The second Druze seat in the Aley district which is currently being occupied by MP Talal Arslan .

When Jumblatt defected from March 14 and nominated Hezbollah’s candidiate Nagib Mikati for premier in 2011 , Hamade left Jumblatt’s parliamentary bloc and joined the Future Movement bloc. Some reports indicated that Jumblatt will not nominate his own candidate in the Chouf district to leave the seat for Hamade.

In the case of Aley district Jumblatt in 2009 did not nominate any candidiate for the second Druze seat and left it to Arslan.

Sami Nader, a professor of International Relations at Saint Joseph University, described Jumblatt’s move to name his bloc’s candidates for the upcoming polls as political maneuvering aimed at reminding rival coalitions that an electoral law to hold polls on time exists, the Daily Star reported on Tuesday

“What Jumblatt is trying to do is to create a fait accompli in the country and pressure everyone to accept it,” said Nader, adding that the move is also part of the ongoing negotiations to reach a compromise on a new election law.

“His [Jumblatt] move is also to counter what March 8 is doing … March 8 is seeking to make Parliament Speaker Nabih Berri call for a parliamentary session to scrap the 1960 law and put the Orthodox Gathering proposal for a vote,” he said.

“While the Parliament might succeed in getting rid of the 1960 electoral law, the chances of adopting the Orthodox Gathering proposal are low because not all MPs from the Phalange Party and the Lebanese Forces would vote for it despite their parties’ endorsement of the proposal,” Nader added. He also said there was heavy pressure from the international community to force the country to hold polls on time.

Adopted in Doha, Qatar in 2008, the modified 1960 electoral law is based on elections being held according to the winner-takes-all system in 26 electoral districts.

The deadline for submitting applications is April 10

PSP’s decision to present its list of candidates comes a day after President Michel Suleiman warned the country’s political leaders that he was opposed to extending Parliament’s term due to a lack of an agreement on a new electoral law.

1960 law is the problem for others

Officials from the Lebanese Forces  ruled out submitting candidacies before April 10.

“We are committed to holding elections on time, but we cannot accept the 1960 law because it does not allow fair Christian representation in Parliament,” Bsharri MP Elie Keyrouz said.

The Phalange Party also opposed filing nominations for candidates who wanted to run for elections under the current law. “If anyone applies, he would be approving the existing 1960 law,” said a political adviser to the party.

“Everyone knows it doesn’t matter whether you submit your nomination or not because we will not be able to hold elections on time,” added the official, who spoke on condition of anonymity.