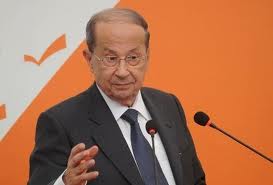 “Jumblatt is mentally unstable and he is trying to punish us because we backed the Orthodox Gathering (electoral) law,” Aoun told OTV.

He accused Jumblatt of corruption

“There is collective impotence in this state which is built upon a mafia-like structure and those who robbed and embezzled are fighting us now,” Aoun said

“I tell Walid Jumblatt, ‘where would you go if I opened the case of the Ministry of the Displaced?’” Aoun went on to say.

According to observers Aoun who has been suffering from Bipolar disorder (historically known as manic–depressive disorder ) threatened Jumblatt on several occasions over his role at the Ministry of the Displaced, but never gone through with it . The observers pointed out that Aoun’s record as the acting PM may be the reason , because many accuse him of robbing the state of $50 million before he was defeated by the Syrian army in 1990 and fled to France where he remained in exile until he returned to Lebanon days after the Syrian army withdrew from Lebanon .

Hezbollah reportedly tried to mend the relations between Aoun and Jumblatt , because without his ( Jumblatt’s) support March 8 alliance will not be able to form a new cabinet, but sharp differences surfaced between the two over the energy and telecommunication ministries in the next cabinet.

“FPM will not be handed over the energy and telecommunications ministries… It’s impossible and will not happen again,” the As Safir newspaper quoted Jumblatt as saying in remarks published on Tuesday.

Aoun defended the performance of his ministers and said:

“I want to ask Walid Jumblatt, ‘what have you done since joining the cabinet in May 1984? What are your accomplishments?’”

“If the Orthodox law was not approved, I would consider that we are living under a dictatorial authority and going through a phase of degeneration in state institutions. Those who abandon the Orthodox Gathering law will be cursed by history,” Aoun added.

“We have reached a point where laws have become totally disregarded by officials, including Mikati, who tried to manipulate the laws by seeking to extend (Internal Security Forces chief Ashraf) Rifi’s term.”

“Several crimes happened during Rifi’s tenure and none was solved, but legally speaking, the extension was an issue to be decided by the entire cabinet “.

“When Mikati decided that Rifi is more important than the government, he toppled it, because there are severe situations that he didn’t want to be held responsible for,” he said.

Aoun asked: “How can we name Mikati again after he resigned over two demands and he now has five conditions to return to the premiership?”

According to observers Rifi solved more crime related issues than any of his predecessors , but Aoun’s ally Hezbollah which dominated the cabinet did not cooperate at all with him.

Observers pointed out the following:

– Hezbollah prevented the minster of communications who represents Aoun in the cabinet from handing over to the Internal Security Forces the telecommunication data on the criminals.

– Observers list some of the key achievements under Rifi.

* Several Israeli spy networks were uncovered including FPM member Fayez Karam, who reportedly was spying for Israel with the complete knowledge of Aoun

Hezbollah also reportedly tried to mend the relations between Aoun and Speaker Nabih Berri , but so far has not succeeded.

Aoun reportedly wants Berri to call for a parliament session to annul the 1960 electoral law but the speaker has refused , because he wants the politicians to agree on another law first . According to Berri the orthodox law cannot replace the 1960 law because many parliamentary blocs oppose it.