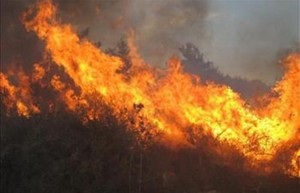 A huge fire erupted on Monday on the road to Jeita Grotto near the Jeita Country Club resort, gutting all trees across 3 square kilometers of forestland, National News Agency reported.

No injuries were reported

NNA said said the blaze was caused by the power lines installed over the forest.

NNA added that the Jeita Country Club is safe .