Caroline Kennedy to be US ambassador to Japan? 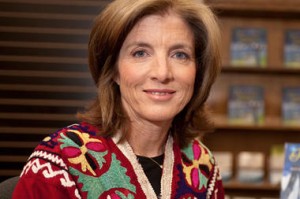 Caroline Kennedy, daughter of the late President Kennedy, may be on her way to a highly coveted diplomatic post: US ambassador to Japan.

The nomination has long been rumored, “but now things have apparently been firmed up,” The Washington Postreported Monday. “The move, which her office did not return a call about, is almost certain to thrill the Japanese, who like their American ambassadors to be superstars.”

Kennedy comes as close as any American to being royalty, and her high-profile role in boosting President Obama back when he was a first-time presidential candidate pretty much guaranteed her a primo assignment. She was reportedly offered Canada, but declined.

So why is all this happening now, and not after Mr. Obama’s first presidential election? Part of the reason may well lie in the new occupant of the State Department’s seventh floor: Secretary of State John Kerry, former senator from Massachusetts. Secretary Kerry’s predecessor, Hillary Rodham Clinton, had vied mightily with Obama in 2007 and 2008 for the Democratic presidential nomination. Kennedy’s endorsement of Obama in January 2008 was seen as a major blow to then-Senator Clinton.

“I have never had a president who inspired me the way people tell me that my father inspired them,” Kennedy wrote at the time in an op-ed in The New York Times.

The Kennedy family history of public service runs deep. Besides her father, two uncles – Robert F. Kennedy (D) of New York and Edward Kennedy (D) of Massachusetts – served in the US Senate. Several cousins have served in state government and in the US House. After a hiatus, the next generation of Kennedys has sent its first member to Congress: Rep. Joseph P. Kennedy III (D) of Massachusetts was elected last November.

Family patriarch Joseph P. Kennedy Sr. served as US ambassador to the Court of St. James (a.k.a. theUnited Kingdom) under President Franklin Roosevelt.