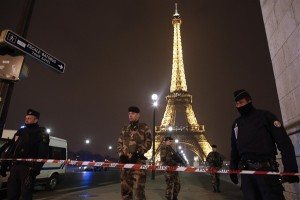 Police evacuated about 1,400 tourists and staffers at the Eiffel Tower for two hours after an anonymous individual called in a bomb threat Saturday, but people were later allowed to return.

French media reported police had lifted the security alert around 10 p.m. local time, saying the threat appeared to be a hoax. The public was allowed to return once investigators completed the search for suspicious devices.

Investigators used sniffer dogs to search the Eiffel Tower for any explosive devices.

French police have received similar calls in the past and have always evacuated the famous tourist attraction as a precaution. The tower was evacuated at least once last year and twice in 2011, according to The Associated Press.

News website Le Parisien reported that police said the threat was called in from a telephone booth in a Paris suburb.