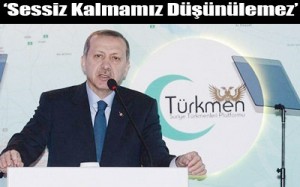 During a conference in Ankara for the Syrian Turkmen , Turkish Prime Minister Recep Tayyip Erdogan told them that they should not remain silent in the face of suffering and tyranny and urged them to join the opposition to help in overthrowing the regime and creating a democratic Syria.

Turkey, which is hosting hundreds of thousands of Syrian refugees has been calling on Syrian president Bashar al Assad to step down.

Erdogan predicted that the death toll in Syria could soon reach 100,000.