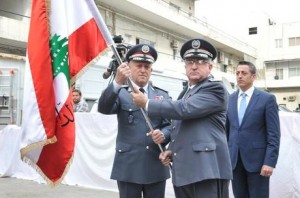 Rifi , who reaches the retirement age of 59 on Monday April 1 , said that he was leaving his post with a clear conscience and proud of ISF achievements.

“My conscience is clear,” Rifi said seven days after Prime Minister Najib Mikati resigned over the rejection of the Hezbollah-led March 8 majority alliance to extend his term.

Salem will serve as acting head of the ISF until a new director-general is appointed.

The Future Movement bloc has proposed a draft-law that allows both Rifi and Army chief Gen. Jean Kahwaji to stay in their posts until they reach respectively the age of 62 and 63.

Rifi, who took charge of the department in 2005 , two days after the Syrian army withdrew from Lebanon cited several achievements made by the ISF during his term and said he is proud of ISF achievements :

“we are proud of our achievements.” He said

Both were assassinated and Hezbollah and Syria was accused of being behind their murder.

Rifi said he hopes and prays that Hassan’s murder will be the last assassination in Lebanon.

He said he has known Brig. Salem for 40 years and is absolutely sure the ISF will be in secure hands.