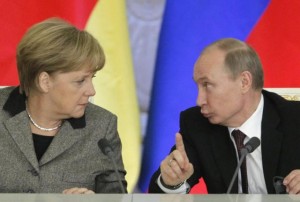 Cyprus is a tiny nation, barely larger than Delaware, but it has long been a place where far larger powers have clashed. Now Germany and Russia are the latest to face off on the island.

A European bailout this week to save Cyprus’s finances cost wealthy Russians much of the cash they had deposited there. While negotiating the deal, Germany was adamant about not rescuing a system officials suspected was a hub for Russian money laundering.

Relations between the two longtime allies have sunk to a low. Russian leaders have thundered against measures they compared to the expropriation of wealthy Russians’ property during the Soviet era. German leaders, backed by public opinion, have taken a hard line against more generous assistance that would have allowed the depositors in Cypriot banks to keep their money. And with German-backed nongovernment organizations in Russia swept up in a wider crackdown on foreign-funded groups in recent days, Russia’s ambassador to Berlin was hauled in for a stern conversation on Tuesday with German Foreign Minister Guido Westerwelle.

The rift jeopardizes ties between Russia and its most powerful, wealthiest ally, which has long been more sympathetic to Russian interests than have other European countries or the United States. It leaves Russia more isolated at a time when the vast nation is turning inward and cracking down on domestic opposition, and it also leaves Germany less able to press Russia to abandon its support for the government of Syrian President Bashar al-Assad.

Europe behaved like “a bull in a china shop” in its negotiations with Cyprus, Russian Prime Minister Dmitry Medvedev told reporters in Moscow last week.

After the bailout deal was reached Monday, German Chancellor Angela Merkel countered that the plan “held responsible those who caused the failures.” The bailout will largely wipe out deposits above $130,000 at Cyprus’s second-largest bank and take an estimated 30 to 40 percent chunk of big deposits at the largest bank.

Cypriot leaders tried desperately last week to extract assistance from Russia that would provide more favorable terms, with Cypriot Finance Minister Michalis Sarris flying to Moscow for days of negotiations. Energy Minister George Lakkotrypis also went to Moscow, ostensibly for a tourism conference, but many observers suspected he was there to try to pledge part of Cyprus’s natural gas resources as a sweetener for a deal.

They left empty-handed — an outcome approved of in Germany, where politicians had warned Cyprus that, as one of the 17 nations that shares the euro currency, it should abide by European terms, not Russian ones.

For years, Russia and Germany were close partners, with German leaders especially interested in ensuring a steady supply of Russian natural gas for their energy needs. Merkel’s predecessor as chancellor, the center-left Social Democrat Gerhard Schroeder, was personally friendly with Russian President Vladimir Putin, and after Schroeder left office, he became chairman of Nord Stream, a German-Russian company that operates a gas pipeline between the two countries.

But Merkel — who grew up in communist East Germany and was a star Russian-language pupil — has been far more cautious about Putin, who spent five years as a KGB agent stationed in Dresden, Germany. Late last year, she clashed openly in an appearance with Putin over the treatment of the jailed members of Pussy Riot, a feminist opposition rock band. The German commissioner for German-Russian cooperation, Andreas Schockenhoff, offended Russian leaders so badly last year when he condemned Russia’s crackdown on the opposition movement that the Russian Foreign Ministry said it would no longer recognize him in his job. Merkel’s spokesman responded that was for Germany to decide, not Russia.

Merkel will host Putin in Germany in early April, when the two are expected to discuss their uneasy relations. Germany has had the most leverage with Russia in the Western push to get the Kremlin to curtail its support for Syria’s Assad, but its efforts have yielded little over the more than two years of conflict. Merkel’s opponents have suggested that she try to patch up relations with Putin to try to improve cooperation between their countries.

“Our Western standards of plural democracy are not directly transferable to Russia,” said Social Democratic leader Peer Steinbrueck, Merkel’s main opponent in September’s elections, in an interview this week with Germany’s Die Zeit newspaper. Germans should criticize human rights violations “in bilateral discussions, not in the public square,” he said.

Still, one analyst said, some of the heated rhetoric on the Russian side may simply be posturing, because the country continues to need energy customers.

“Putin is very well aware of the fact that the Western public, and in particular the German public, thinks quite critically of him and his policies,” said Grigory Golosov, project director for the Center for Democracy and Human Rights Helix in St. Petersburg. “At the same time, he is very interested in keeping good relations with Germany.”