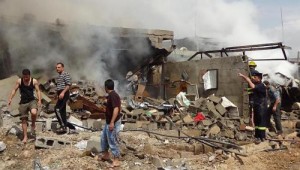 Car bombs hit five Shi’ite mosques in Baghdad and the northern Iraqi city of Kirkuk just after prayers on Friday, killing 19 worshippers and injuring another 130.

Ten years after the U.S. invasion that toppled Saddam Hussein, Iraq is still grappling with political turmoil and Sunni Islamist insurgents linked to al Qaeda, who are stepping up attacks on Shi’ite targets and security forces.

Friday’s blasts hit Shi’ite mosques in southeast and north Baghdad while another tore the front off a mosque in Kirkuk, an ethnically mixed city of Arabs, Kurds and Turkman 170 km (100 miles) north of the capital.

“We were listening to the cleric’s speech when we heard a very strong explosion. Glass scattered everywhere and the roof partially collapsed,” said Mohammed, a victim wounded in the Kirkuk blast, his shirt still covered in blood.

Police and health officials said the attacks in Baghdad killed 16. Three more died in Kirkuk, where the blast left a jumble of concrete wreckage in the mosque and on the street outside.

Attacks in Iraq are still less common than during the Sunni-Shi’ite slaughter that erupted at the height of the last war, when insurgents bombed the Shi’ite al-Askari shrine in Samarra in 2006, provoking a wave of retaliation by Shi’ite militias.

Al Qaeda’s local wing, Islamic State of Iraq, has vowed to keep up attacks and security officials say insurgents are regrouping in the deserts of western Iraq, invigorated by the war Sunni rebels are waging in Syria over the border.

Al Qaeda in Iraq claimed responsibility for a wave of bombings and suicide attacks earlier this month that killed around 60 people on the 10th anniversary of the U.S. invasion.

Sunni Islamists see Prime Minister Nuri al-Maliki’s Shi’ite-led government as oppressors of the country’s Sunni minority and are targeting Shi’ites to try to trigger the kind of inter-communal mayhem that killed thousands in 2006-7.

Washington has tied the militant al-Nusra Front fighting in Syria to al Qaeda’s Iraqi branch and has designated the group as a foreign terrorist organization.

Iraq’s government says it takes no sides in the Syrian war but its interests are often aligned with those of Shi’ite Iran. U.S. Secretary of State John Kerry on Sunday pressed Maliki to stop Iranian flights taking arms over Iraqi airspace to Syria.

Photo: Firefighters and Iraqis stand amid the remains of a burnt house after a car bomb that detonated near a Shi’ite mosque killing three people and injuring 70 others in Kirkuk, 240km north of Baghdad on Friday, March 29, 2013. A series of car bombs near Shi’ite mosques targeting worshippers attending weekly prayers killed at least 15 people on Friday, the latest in a spike in unrest ahead of Iraq’s first polls since 2010. — PHOTO: AFP