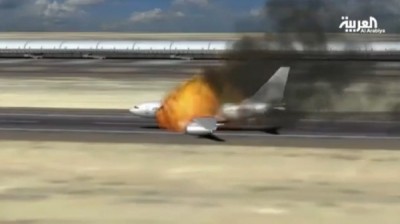 The rebel Free Syrian Army claimed that it has destroyed a plane carrying arms from Iran, and showed a picture of the plane on fire as it was trying to land at the Damascus International Airport.

But the state-run Syrian Arab News Agency denied the report, saying everything was “normal.”

“The media reports on the airport carried out by media outlets that are accomplices in Syrian bloodshed are not true,” SANA said.

The rebels claimed that the aircraft was hit and caught fire, setting sections of the airport ablaze.

Iran has long been suspected of providing a weapons lifeline to Syria, mostly using flights or convoys passing through the territory or airspace of Iraq.

Last Sunday, US Secretary of State John Kerry confronted Iraq for continuing to grant Iran access to its airspace.

Kerry said the plane shipments — along with material being trucked across Iraqi territory from Iran to Syria — were helping President Bashar Assad’s regime cling to power by increasing their ability to strike at Syrian rebels and opposition figures demanding Assad’s ouster.