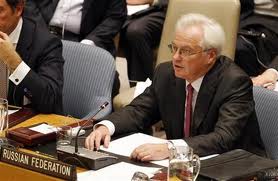 Russia’s UN envoy Vitaly Churkin said Thursday  he  will strongly oppose any bid to give Syria’s UN seat to the rebel coalition fighting President Bashar al-Assad, adding “recognizing the Syrian National Coalition  would undercut the standing of the UN.”

He  reiterated  Russia’s condemnation of the Arab League for naming the coalition as the legitimate government stressing that  the League was now playing a “negative” role in the two-year-old Syrian conflict.

“We will oppose it very strongly, but you know I don’t think it is going to happen,” Churkin told reporters.

He said most UN states are “responsible” members, noting: “They value this institution, they understand that if something of the sort were to happen, that would really undercut the standing of the United Nations.”

“You do not simply seat opposition groups who have gone through no proper process of legitimization and say well now they are the representatives of Syria,” Churkin added.

“I think that this kind of a motion would not find very much support in the United Nations. And I think most of the countries are smart enough to understand that if they were to go down that road they themselves might be the target of such manipulation in the future,” he added.

Russia, Assad’s most powerful ally, is a current member of the General Assembly’s credentials committee, which would make a recommendation to the full assembly on Syria’s membership.

No formal move is expected  by the Syrian opposition however before the new UN General Assembly year starts in September.

Russia criticized the Arab League on Wednesday for giving a seat formerly held by Syria’s government to a representative of the opposition to  at a summit in Doha.

“In Doha, another anti-Syria step was taken,” the Russian Foreign Ministry said in a statement on Wednesday.

Opposition leader Moaz Alkhatib took Syria’s vacant seat on Tuesday at the Arab summit, which also lent its support to giving military aid to the rebels fighting to oust Assad.

“We demand … the seat of Syria at the United Nations and at other international organizations,” Khatib said during the summit.

On Wednesday Qatar handed over the Syrian embassy to the opposition.

Russia, Syria’s   main  arms supplier,  has blocked three U.N. Security Council resolutions that would mount pressure on Assad to end the violence that killed more than 70,000 people in two years.