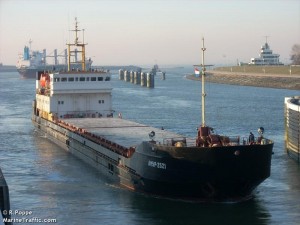 A truck ferry route to Jordan was established this week the Sidon Chamber of Commerce announced on Tuesday.The Daily Star reported

Mohammad Saleh, the head of the chamber, said the first roll-on-roll-off ship headed to Jordan five days ago and arrived to Aqaba on Monday. He added that a second ship would be leaving for Jordan within the next few days.

“The escalation of the Syrian crisis and the difficulty of shipping Lebanese products through the country … forced us to launch this initiative ,” a statement by the chamber said.

“Lebanese trucks will be able to continue their trips to destination countries using the same land routes as before,” it added.

Antoine Howayek, head of the Lebanese Farmers’ Association, praised the step, which he said was very positive but only came after months of procrastination by the government.

Howayek said the cost per truck for the trip to Aqaba would be $2,000, which he said was higher than the cost of land shipment.

Howayek said the Turkish operator of the ship had agreed to lower the price from $2,700 per truck, following mediation by the chambers of commerce and several ministries.

But the relatively high price of the shipping will harm the competitiveness of agricultural produce, Howayek said, adding that the Investment Development Authority of Lebanon should offer subsidies to exporters.

“A subsidy of $1,000 [per truck] would boost the competitiveness of Lebanese produce to normal in the Gulf Cooperation Council, where competition has been increasing for several kinds of produce,” he said.

Howayek is not optimistic about future exports via syria.

“It is really important that we continue putting contingency plans, plans that deal with the closure of the Syrian borders before exporters. At least for now,” he said.

Editor’s note: It is worthwhile to note that Ya Libnan has been calling for using the sea as an alternative export route for nearly eight years. We are glad someone took the initiative to implement this.

Ya Libnan reported on March 25 in response to the closure of the Syrian border in the face of the lebanese exports:

In June 2007 when the fighting between Fatah al-Islam militants and the Lebanese army erupted , Syria closed the borders in the north of Lebanon, because the Lebanese accused the Syrians of supporting the militants.

Ya Libnan also reported last february that Former Royal Navy officer Philip Beale is trying to prove that it was the Phoenicians who discovered America first and for this reason he is building a replica Phoenician boat 10,000 kilometers across the Atlantic in an ambitious voyage that could challenge maritime history.

By completing the journey, Beale aims to demonstrate that the Phoenicians — the ancient Mediterranean civilization that prospered from 1500BC to 300BC — had the capability to sail to the U.S.; a theory disputed by historians.

“It is one of the greatest voyages of mankind and if anyone could have done it [before Columbus], it was the Phoenicians,” said Beale.

“Of all the ancient civilizations they were the greatest seafarers — Lebanon had cedar trees perfect for building strong boats, they were the first to use iron nails, and they had knowledge of astrology and currents.” Beale added

So using the sea should not be difficult for the lebanese after all !