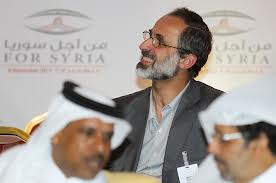 An Arab Summit intended to showcase the unity of the Syrian opposition threatens to veer wildly off script and expose deepening factionalism, potentially hurting Western and Arab efforts to end the war.

Opposition ranks plunged into disarray on Sunday when one of their most popular figures, Moaz Alkhatib, resigned as head of the National Coalition for Syrian Revolutionary and Opposition Forces, undermining its claim to provide a coherent alternative to President Bashar al-Assad.

His decision ahead of the Tuesday and Wednesday’s summit of Arab leaders in Qatar will make it harder for the gathering to paper over the fissures in opposition forces that have so far dissuaded Western states from giving decisive military support.

If the summit turns out to be fractious, the morale boost for Assad could be considerable and Qatar’s self-appointed leadership role in sponsoring the opposition could come under fresh scrutiny.

Nikolaos van Dam, a Dutch historian of Syrian politics and an ex-diplomat, told Reuters the outcome of Alkhatib’s resignation “looks like a mess” even in comparison to earlier, failed opposition efforts to forge a common front against Assad.

“It’s back to square one in terms of forging a common position.”

Opposition rifts are many: between liberals and various sorts of Islamists, between exiles and groups that operate within Syria, and between those seeking a political settlement and those who insist an armed campaign is the only solution.

Those divisions are reflected among Arab states, which agree on little other than their professed abhorrence of the bloodshed caused by an increasingly sectarian, two-year-old conflict that has cost more than 70,000 lives.

Some, like the rich Sunni-ruled kingdoms of Qatar and Saudi Arabia, have taken the lead in openly supporting and covertly arming the mainly Sunni-Muslim rebels fighting against Assad, a member of the Shi’ite offshoot Alawite minority sect.

Other Sunni-led Arab countries support the rebels publicly with varying degrees of enthusiasm.Iraq and Lebanon, the only Arab states apart from Syria itself where Shi’ites hold a share of political power, have deeper misgivings and divided loyalties, and fear sectarian violence crossing their borders.

“BACK TO SQUARE ONE”

Alkhatib was seen as a moderate bulwark against the rising influence of al Qaeda-linked militant Sunni groups fighting in the opposition.

The 53-year-old had been due to attend the summit as coalition head, a move that would have bolstered regional support and rebel morale, and possibly garnered more Arab and Western funding.

He did not give a reason for his decision to step down, but he has indicated that he was frustrated by efforts to undermine his authority since he proposed talks with Assad’s government.

The summit’s Arab League organizers and Qatari hosts will have to display deft diplomatic footwork to suppress a sense of disarray and disappointment in opposition ranks.

“(The resignation) has been brewing for some time, but the manner in which he did it – with summit host country having given so much support to the opposition – surely has not been well-received,” said Salman Shaikh, director of the Brookings Doha Center think tank.

“We cannot paper over the cracks in the opposition, and indeed in the Arab League itself,” he said.

Even if the summit is able to produce a credible and powerful statement, the opposition would still be in genuine disarray and need to become diverse and representative, he said.

“If it doesn’t, I believe this particular coalition’s days are numbered.”

Alkhatib said on Monday he would still address the gathering in the name of the Syrian people. The soft spoken cleric, who espouses a breed of religious tolerance and political pragmatism rooted in his upbringing in cosmopolitan Damascus, is arguably the most popular member of the opposition inside Syria, including among those who had stayed away from the revolt.

The coalition was formed in Doha in November as an alternative to Assad, superseding the Syrian National Council, another umbrella opposition organization largely influenced by the powerful Muslim Brotherhood.

That Islamist group and its allies now form a dominant bloc in the coalition, but the coalition has not shaken an image as consisting mostly of foreign-backed exiles immersed in political wheeling and dealing.

Alkhatib had little interest in coalition politics, while two power centers quickly emerged in the group: the Muslim Brotherhood and its allies inside and outside the Syrian National Council, and the coalition’s secretary general, Mustafa Sabbagh, widely seen as having strong links with Qatar.

Against Alkhatib’s wishes, the two sides pushed last week for the quick appointment of Ghassan Hitto, an Islamist-leaning technocrat, as provisional prime minister.

When the coalition chose Hitto in a ballot in front of news media in Istanbul the outcome was so well arranged that one Arab news channel announced the winner before a single vote was cast.

Alkhatib was weakened considerably, but he may have made an astute move by distancing himself from the coalition and from an opposition government some say is doomed to failure.

His departure may also pose a test of Qatar’s self-appointed role as a leading sponsor of the opposition.

Michael Stephens, researcher at the Royal United Services Institute based in Doha, said that after Alkhatib’s resignation the Qataris would now want to make sure that there was a united position at the summit, though how they would achieve it was unclear.

“At the end of the day, the Qataris wanted to lead on this issue, but it hasn’t worked out that way,” he said.

In a sign of disarray following Alkhatib’s resignation, an official for the Free Syrian Army armed opposition force said the group did not support Hitto.

“We do not support Hitto or any other prime minister unless they are chosen on the basis of consensus,” said spokesman Louay Mekdad.