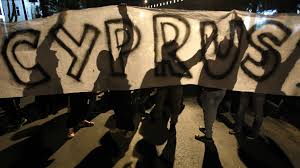 Stocks on Wall Street edged higher at the opening of trading on Monday after negotiators reached a deal to keep Cyprus afloat with a financial bailout and avert the country’s possible exit from the euro zone.

The deal between Cyprus and the heads of the European Union, the European Central Bank and the International Monetary Fund will spare the Mediterranean island a likely banking collapse by winding down the largely state-owned Popular Bank of Cyprus and shifting deposits below 100,000 euros to the Bank of Cyprus to create a “good bank.”

“The problems in Cyprus had held the market back a little bit, so I guess there will be some relief,” said Rick Meckler, president of investment firm LibertyView Capital Management in Jersey City, N.J. “This takes away one of the hurdles for moving higher.”

Mr. Meckler said a new high for the S.&P. 500 during a low interest-rate environment was likely to lure more investors into equities, serving as a catalyst to move equities even higher.

A lack of major market-moving economic indicators in the United States on Monday will keep investors focused on developments in Cyprus.

Among individual stocks, Dell said it received alternative proposals from the Blackstone Group and the billionaire investor Carl C. Icahn that could be superior to the $24.4 billion offer received last month from the company’s founder, Michael S. Dell, and the private equity firm Silver Lake Partners. Dell shares rose 3.3 percent.

The Apollo Group, owner of the University of Phoenix, rose 9.2 percent after it reported a better-than-expected profit, even as student sign-ups fell for the fourth-straight quarter.