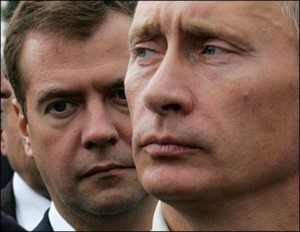 Dmitry Medvedev gave a taste of Moscow’s displeasure over the Cyprus rescue plan on Monday when he said “the stealing of what has already been stolen continues”.

Meeting deputies at his residence outside the city, Russia’s Prime Minister said there was a need to “understand what this story turns into in the long run, what the consequences for the international financial and monetary system will be – and thus, for our own interests as well.”

Mr Medvedev prefaced his comments by addressing Deputy Prime Minister, Igor Shuvalov, with the words: “Let us, Igor Ivanovich, talk about what’s happening with Cyprus. The stealing of the stolen is continuing there, I think.”

The seemingly clumsy phrase was in fact a sharp reference to a quote attributable to Vladimir Lenin, who used it to justify the confiscation of capitalists’ property.

“The old Bolshevik was right when he explained what Bolshevism was to the Cossack who’d asked him if it was true the Bolsheviks stole,” Lenin is said to have mused after the 1917 revolution. “‘Yes, [the Bolshevik] said. ‘We steal what has already been stolen.’”

That phrase, in turn, harked back to Karl Marx’s call in Das Kapital for “expropriation of the expropriators”.

It is not the first time Mr Medvedev has made such a reference. Last week, he compared the proposed bank deposit levy on Cyprus to “expropriation and confiscation… only comparable to decisions made at a certain period of time by Soviet authorities, who did not stand on ceremony when it came to people’s savings.”

But the “stealing the stolen” phrase appears to offer a tastier verbal feint: suggesting dissatisfaction at the levy, while at the same time subtly acknowledging suspicions about the provenance of Russian loot lying in Cypriot banks.