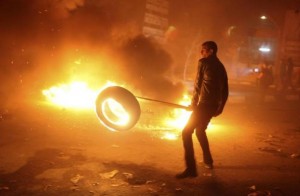 Egyptian President Mohamed Mursi threatened on Sunday to take unspecified steps to “protect this nation” after violent demonstrations against his Muslim Brotherhood, using vague but severe language that the opposition said heralded a crackdown.

In remarks following clashes outside the Brotherhood’s Cairo headquarters on Friday, Mursi warned that “necessary measures” would be taken against any politicians shown to be involved in what he described as violence and rioting.

“If I am forced to do what is required to protect this nation, then I will do it. And I fear that I might be on the verge of doing it,” Mursi said in a statement. He did not elaborate.

Mursi has faced increasing anger since the Brotherhood propelled him to power in a June election, and several spates of protest have turned into violent riots.

Mursi’s opponents accuse him and the Brotherhood of seeking to dominate the post-Hosni Mubarak era and resorting to undemocratic police powers two years after autocrat Mubarak was brought down by popular protests.

The brotherhood accuses its secularist opponents of stirring trouble to seize power they could not win at the ballot box, and says the relentless civil unrest is wrecking efforts to salvage aneconomy driven to its knees by uncertainty.

“I can see language that is heading towards taking some suppressive measures,” he added.

Dozens of people were hurt on Friday when several thousand supporters and opponents of the Brotherhood fought near the Islamist group’s headquarters.

RUNNING OUT OF PATIENCE

Dawoud said the NSF was not behind those protests, but added that some of its members may have decided to take part.

Mursi said everyone had the right to peaceful protest, but “what is happening now has nothing to do with the revolution”.

“I urge all political forces not to provide any political cover for acts of violence and rioting. I will not be happy if investigations prove the guilt of some politicians,” he said in the remarks, which were published on his Twitter account.

“Some are using the media to incite violence and those whose involvement is proven will not escape punishment,” he added. “Anyone who takes part in incitement is a partner in the crime.”

He also spoke of attempts to portray the state as weak but said these had failed: “The apparatus of the state are recovering and can deter any law breaker,” he added.

Exactly what new steps Mursi is considering became the subject of speculation.

In late January, he declared a state of emergency rule in three cities near the Suez Canal to combat a wave of violence there. A declaration of a state of emergency elsewhere is unlikely, said Yasser El-Shimy, Egypt analyst for the International Crisis Group, adding arrests were more probable.

“My impression is that Mursi and the Brotherhood in general have had it with the violence that is taking place and they are running out of patience,” he said.

“This is definitely the strictest he has spoken regarding the rioting,” he added. “Now Mursi feels there is enough public opinion on his side to justify taking stricter measures.”

One recent source of tension between Mursi and the opposition was his call for parliamentary elections based on a controversial election law. The vote, due to begin in late April, has been postponed by a court ruling and it is now not clear when it will happen.

Mursi’s opponents say they are committed to peaceful protest and have also accused the Brotherhood of using violence and inciting tension in the street. The Brotherhood says the opposition has done little to rein in its followers.