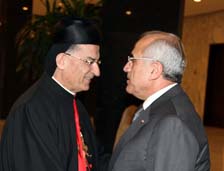 Maronite Patriarch Beshara al-Rai met on Friday with President Michel Suleiman at the presidential palace in Baabda to brief him on the so-called “Rome agreement,” ahead of a meeting with the main Christian leaders, Lebanese media reported.

According to Al-Liwaa newspaper Rai sought to meet with Suleiman to inform him of his agreement with Speaker Nabih Berri and Prime Minister Najib Mikati during their recent visit to Rome.

The agreement also calls for the formation of a senate, where senators would be elected according to the Orthodox Gathering proposal.

Rai reportedly did not yet set a date for his meeting with the Christian leaders.

Suleiman and Mikati have signed a decree that sets the elections on June 9 based on the 1960 law that was used in the 2009 polls over the lack of agreement between the bickering parliamentary blocs. But Rai stressed on Thursday upon his return from the Vatican that any proposal other than the 1960 law, which is based on winner-takes-all system, has his blessing.

Free Patriotic Movement leader MP Michel Aoun rejected on Tuesday any possible alternative to the Orthodox Gathering electoral law, saying that the rights of Christians in Lebanon are being seized.

“I was not informed of any of the discussions that were held in Rome.” He said when asked about the Rome agreement

Aoun stressed that the Orthodox Gathering law is constitutional, as is the proposal that calls for the adoption of Lebanon as a single district based on proportional representation.

Last week Aoun said that all parties that reject Orthodox Gathering law are committing crimes against the country.

“If the Orthodox Gathering’s proposal is not adopted, it [will remain] impossible for us to reach consensus on a new law,” Aoun said adding “if the Orthodox draft fails to pass, all the parties who reject it would be “criminals against the country.”

In an interview with As-Safir newspaper, Mikati reiterated his rejection of the Orthodox Gathering electoral draft law .

“The Orthodox law will legalize federalism and cantons and will undermine the Taef Accord,” he told the daily

The Orthodox draft law, which calls for proportional voting along sectarian lines had been endorsed by the country’s four major Christian parties. However, it was met with severe opposition from the Future Movement, the PSP, and independent March 14 Christian MPs, as well as President Michel Suleiman.