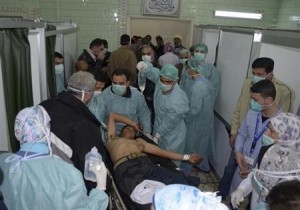 Britain said on Wednesday reports of a chemical attack in Syria strengthened the case for relaxing a European Union arms embargo on the country, and warned that a failure to do so could lead to the kind of wartime massacres seen in Bosnia.

Britain and France are pushing for the EU ban to be eased to allow a flow of arms to outgunned rebels waging a two-year-old uprising against Syrian President Bashar al-Assad, but several EU countries and Russia oppose the move.

“The French president is concerned and I am concerned that we should not be restricted for months and months ahead when we don’t know exactly what could happen in Syria, including the very worrying reports of use of chemical weapons,” British Prime Minister David Cameron told parliament.

On Tuesday the Syrian government and rebel forces accused each other of launching a chemical attack near the northern city of Aleppo that killed 25 people. Western powers say they are investigating whether chemical weapons were used.

The current arms embargo is part of a package of sanctions on Syria that expires on June 1, but Britain and France have pushed to review the ban earlier.

Both countries tried in vain to convince other EU leaders to relax the embargo at a European Council meeting last week, and EU foreign ministers are expected to discuss the issue further this weekend.

“I felt (while) sitting round the European Council chamber, there was a slight similarity between some of the arguments being made about not putting more weapons into Syria, that seemed to me very familiar to the discussions we had about Bosnia, and the appalling events that followed,” Cameron said.

Thousands of Muslim men and boys were killed in the Srebrenica massacre during the 1992-1995 Bosnian war, deaths many blamed on inaction by the international community.

Assad is widely believed to have a chemical weapons arsenal.

Syrian officials have neither confirmed nor denied this but have said that if it existed it would be used to defend against foreign aggression, not against Syrians. There have been no previous reports of chemical weapons in the hands of insurgents.

Cameron acknowledged concern from opposition Labour party leader Ed Miliband about a lack of unity and al Qaeda-allied fighters in the Syrian rebel ranks. But he said Britain should still help build a “legitimate and credible” Syrian opposition.

British officials hope the supply of arms to military officers allied to the opposition Syrian National Coalition will give them more leverage to better control largely uncoordinated insurgents on the ground.

In Paris, French Foreign Minister Laurent Fabius told lawmakers that there would be no change on the ground in Syria if the balance of power did not change.

“When we look at the situation today, Assad is refusing to move because he controls the air, enabling him to indiscriminately bomb the resistance while Russia is resting on this refusal to budge,” Fabius said.

He said that the same mistakes made in Libya where weapons were allowed to spread across the region after the fall of Muammar Gaddafi in 2011 would not be made in Syria.

“Obviously, we have to be sure from those who will receive weapons that they will not be used against us,” he told parliament. “We are working to ensure that.”

Photo: A man, wounded in what the government said was a chemical weapons attack, is treated at a hospital in the Syrian city of Aleppo March 19, 2013. REUTERS/George Ourfalian