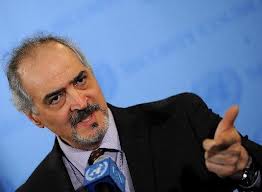 Rebels in the north have denied the government claim and blamed regime forces for Tuesday’s missile attack on Khan al-Assad village in northern Aleppo province.

The U.S. ambassador to Syria, Robert Ford, said Wednesday the Obama administration has no evidence to support Syria’s claims.

Syria’s U.N. Ambassador Bashar Ja’afari told reporters Wednesday morning that he had just requested Ban on behalf of the government “to form a specialized, independent and neutral technical mission to investigate the use by the terrorist groups operating in Syria of chemical weapons yesterday against civilians in the town of Khan al-Assad in Aleppo.” The Syrian government refers to the rebels as “terrorists.”

Ja’afari said Syria asked the secretary-general for assistance “in a sign of good faith, good will, good intentions” to the international community, international public opinion and the Syrian people.

“The Syrian government, if it has such weapons, will never use it against its own population,” Ja’afari said.

He stressed that Syria a party to most U.N. conventions on chemical, biological and nuclear weapons and had proposed a Security Council resolution in 2003 when it was a council member that would have required the Mideast to be free of all weapons of mass destruction. He said it was blocked by the threatened veto of an “influential member,” an apparent reference to the United States, Israel’s closest ally.