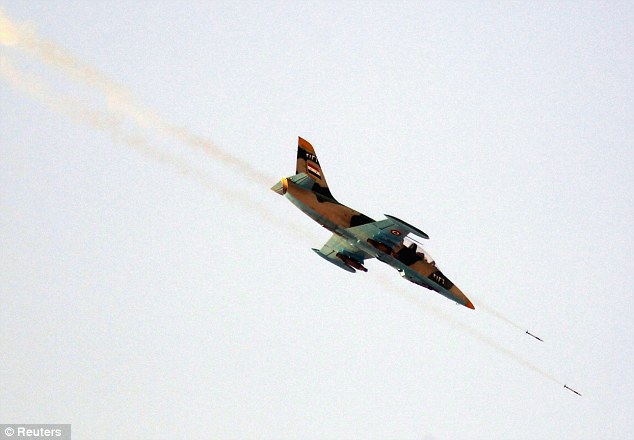 “The president of the republic, General Michel Suleiman, considers Syrian air strikes inside Lebanese territory an unacceptable violation of Lebanese sovereignty,” Suleiman said in a statement from his office, referring to Monday’s air strikes.

“The air raid carried out by the armed forces of the Syrian regime in Lebanese territory, in the Ersal area, constitutes anew and serious violation of Lebanon’s sovereignty,” foreign ministry spokesman Philippe Lalliot said in a statement.

France, which has troops in Lebanon as part of a U.N. peace keeping force, is pushing its EU partners to lift an arms embargo on Syrian rebels.

The U.S. denounced the move as “a significant escalation” of the Syrian conflict.

“We can confirm… that regime jets and helicopters did fire rockets into northern Lebanon, impacting Wadi al-Khayl, near the border town of Arsal,” State Department spokeswoman Victoria Nuland told reporters.

She reminded Damascus that U.N. resolutions called for the strict respect of the sovereignty and territory of Lebanon.

Meanwhile, U.S. ambassador to Lebanon, Maura Connelly, has been in contact with the Lebanese government, Nuland added.

Earlier, a high-ranking Lebanese army official told AFP four missiles had been fired by Syrian warplanes in a mountainous, desert area, which observers say is ideal for the smuggling of arms and the flow of fighters across the border.

A Lebanese security services official on the ground also confirmed that four missiles were fired at Syrian rebel positions on the Lebanese side of the border.

He said the attacks targeted the town of Arsal, in east Lebanon, close to the Syrian border, where many residents back the uprising against Syrian President Bashar al-Assad.

The mountainous, desert area is also ideal for the smuggling of arms and the flow of fighters across the border.

Al-Manar television, which belongs to the pro-Syrian Lebanese Shiite Hezbollah movement, reported that the warplanes had targeted two barns used by “armed men” in the Wadi al-Khayl area of Arsal.

Local resident Suheil Fliti told AFP that the missiles had fallen in an agricultural area and there were no injuries in the incident.

Lebanon has publicly committed itself to staying neutral in the violence engulfing Syria, but the conflict has already exacerbated tensions in the country and there are growing fears it could spill over into Lebanon.

The country’s opposition largely backs the Syrian uprising, while Hezbollah and its allies stand by Assad’s regime.

Syrian rebels accuse Hezbollah of dispatching fighters to battle alongside Assad’s force, while Damascus last week threatened to respond with force if “armed terrorist gangs” continued to infiltrate from Lebanon.

“Syrian forces are showing restraint by not striking these gangs inside Lebanese territory to prevent them crossing into Syria, but this will not go on indefinitely,” the foreign ministry said in a message to its Lebanese counterpart.

On Saturday, a Lebanese government source said Beirut was taking the warning “very seriously” and that “intensive consultations are underway to find the best way to control the border.”