Egyptians Tell Mursi, it’s the loaf before the chair 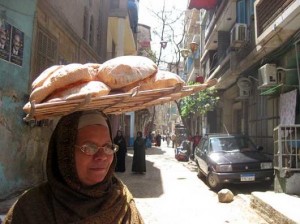 Hundreds of Egyptian bakery owners demonstrated outside the Supply Ministry in the latest challenge to President Mohamed Mursi’s government as it struggles to control anger over soaring prices and a stumbling economy.

The bakers are demanding an increase in their ration of flour, back-payments they claim the government owes them and an end to the diesel crisis that has seen prices for the fuel rise on the black market. They threatened to close if their demands aren’t met.

The protest in Cairo began hours after Supply Minister Bassem Oda told the state-run Middle East News Agency that subsidized bread and butane canisters would be included on a new smart card system that would in effect make them subject to rationing.

“Bassem, tell Mursi, it’s the loaf before the chair,” the protesters chanted in reference to the seat of power.

Egypt has been hit by daily strikes and road blockages over issues such as a shortage of fuel, a security void and opposition claims that Mursi has failed to restore political and economic stability since the ouster of Hosni Mubarak in 2011.

Egypt’s economy has struggled to rebound in the two years since Mubarak’s ouster, with growth slowing in the last quarter of 2012 to 2.2 percent from 2.6 percent in the previous three months, according to government data.

The Supreme Constitutional Court ruled this week that it was illegal for bakeries producing subsidized bread to halt their operations. The decision came after a bakery owner sought permission to change his operations to a private enterprise because he was losing money amid rising fuel and supply costs.

The government is trying to deal with a ballooning budget deficit of 10.8 percent of gross domestic product, reign currency reserves that have tumbled more than 60 percent below their December 2010 levels, at $13.5 billion, and a weakening Egyptian pound against the dollar. The pound has lost 8.8 percent since the central bank started selling dollars at auction in December to ration the use of foreign currency.

Mursi’s administration is negotiating to secure a $4.8 billion International Monetary Fund loan it says is crucial to unlocking other donor aid and financing.

The introduction of the smart cards, which the government hopes will cut its outlay on subsidized fuel, is part of a broader effort to curb mounting costs.

As the bakers’ protest showed, such measures may erode support for Mursi and the Muslim Brotherhood before parliamentary elections later this year. The vote, which was due to take place next month, has been halted by a court order.