U.S. to beef up missile defense against North Korea, Iran 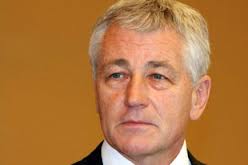 The United States will deploy additional ground-based missile interceptors on the West Coast as part of efforts to enhance the nation’s ability to defend itself from attack by North Korea, Defense Secretary Chuck Hagel announced Friday.

Still relatively new in his post, the Pentagon chief told reporters that 14 additional interceptors to be installed by 2017 would bring the total to 44. It is part of a package of steps expected to cost $1 billion, officials said.

“The reason that we are doing what we are doing and the reason we are advancing our program here for homeland security is to not take any chances, is to stay ahead of the threat and to assure any contingency,” Hagel said.

North Korea also said last week it was nullifying the joint declaration on the de-nuclearization of the Korean Peninsula. One of the country’s top generals, according to published reports, claims Pyongyang has nuclear-tipped intercontinental ballistic missiles that are ready to be fired.

While Hagel said the steps he announced were aimed at addressing the threat from North Korea and Iran, the focus was clearly on the potential for North Korea to some day follow through on its belligerent rhetoric. Iran also is believed to be continuing its efforts to develop nuclear weapon capability.

Military and White House officials have said current U.S. missile defenses are adequate for the present level of threat, and President Barack Obama said in an interview with ABC News this week that he does not think North Korea can carry out a missile attack on the United States.

“They probably can’t but we don’t like the margin of error,” Obama said.

Hagel said Friday that U.S. missile defense systems in place provide protection from “limited ICBM attacks,” but added that “North Korea, in particular, has recently made advances in its capabilities and has engaged in a series of irresponsible and reckless provocations.”

However, Joe Cirincione of the Ploughshares Fund told CNN the planned expansion would only spend more money on a system that doesn’t work to protect against a still unrealized North Korean threat.

The existing missile defense system was “deeply flawed,” said Cirincione, whose foundation opposes nuclear weapons. He added that North Korea was “years away from the ability to field a missile with a nuclear warhead that could hit the United States.”

Hagel acknowledged a problem with the guidance system of missile interceptors and said further testing would occur this year.

“We certainly will not go forward with the additional 14 interceptors until we are sure that we have the complete confidence that we will need,” Hagel said. “But the American people should be assured that our interceptors are effective.”

He also announced the military will work with Japan to increase radar capability to improve early warning and tracking of any missile launched from North Korea.

Asked how China would react to Hagel’s announcement, Undersecretary of Defense for Policy James Miller said: ” I hope that they understand that we need to take steps to protect ourselves from potential threats from Iran and North Korea.”

Part of the move announced by Hagel would involve reopening a missile field at Fort Greely, Alaska.

In 2011, the Pentagon mothballed Missile Field 1, acting on direction from the Obama administration. Instead of permanently decommissioning it, the Defense Missile Agency placed it in a non-operational state.

Republican congressional sources told CNN that they argued against the move.

“North Korea was doing all sorts of things we couldn’t talk about publicly back then,” said one GOP congressional official who is privy to intelligence briefings. “The intelligence did not change. This is right where we expected North Korea to be. It takes about two years to order and take delivery of a new interceptor. That’s why you have to be ahead of the threat.”

In his State of the Union address last month, Obama said the United States would “stand by our allies, strengthen our own missile defense and lead the world in taking firm action in response to these threats.”