Ministry tells Lebanese farmers not to panic about locusts 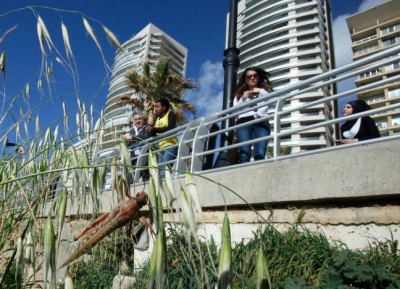 A locust was spotted on a corn stalk in Beirut, March 16, 2013. According to the National News Agency (NNA), Lebanon woke up to news that swarms of locusts, which can consume about 100 thousand tons of green vegetation a day, have been spotted in Tripoli, Akkar, Tyre, Dbayeh and Adonis.

National News Agency also reported that residents in the south were concerned of what the grasshoppers might do to their crops.

However, the general director of the Agriculture Ministry, Louis Lahhoud, reassured farmers by saying that the Ministry saw no cause for alarm at this point and that it was looking into the matter further.

“As soon as we heard the news, we were on high alert and conducted a comprehensive survey on the ground,” he told the NNA.

“There is no need to panic because the [Agriculture] Ministry is fully prepared and there is nothing scary so far,” Lahhoud added.

“Lebanon does not have an environment that is favorable for locust multiplication,” the ministry assured, noting that they arrived in limited numbers.

It elaborated: “The arrival of locust was expected because of the current Pentecostal wind but they will not settle in the country”.

The director of the livestock department at the Ministry Mohammad Abu Zeid also said there were no reasons to assume the locusts posed a risk given the current stage of their lifecycle.

He said the locusts, which arrived in Lebanon Saturday morning, were harmless because “they are not in their mature phase yet.”

He told NNA that the weather, which is expected to turn cold in the coming days, is guaranteed to destroy the creatures and limit their dispersion.