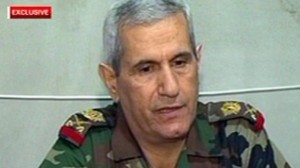 A high-ranking Syrian general who once led a military intelligence office widely believed to be a torture site has defected from the army, he said Saturday, a day after the rebels’ top military commander again called for members of the armed forces to join the uprising against President Bashar al-Assad, now entering its third year.

But there were no reports of unusually widespread or decisive defections in response to a video address in English and Arabic released Friday by Gen. Salim Idris, who defected last July and is now the leader of the Free Syrian Army’s unified military command. Instead, Mr. Assad’s government went on the political offensive, calling on Brazil, China, India and other developing powers to help stop the Syrian conflict and find a political solution to the uprising.

Protests across Syria to observe the uprising’s two-year anniversary were small and muted compared with the exuberant demonstrations that initially set off the revolt, underscoring the growing sense that the war is nowhere near an end. The government remains dug in and is willing to use extreme force, and a political solution appears remote.

The request for political support from developing nations came in a letter delivered by an Assad adviser, Bouthaina Shaaban, to the president of South Africa, who is hosting a meeting next week of the so-called BRICS nations: Brazil, Russia, India, China and South Africa.

As Europe and the United States weigh stronger action to aid the Syrian rebels, including directly arming them, Mr. Assad appeared to be appealing to those nations’ aversion to Western military interventions; all opposed the action that helped topple Col. Muammar el-Qaddafi in Libya.

“President Bashar al-Assad asks for intervention by the BRICS to stop the violence in his country and encourage the opening of a dialogue, which he wishes to start,” Ms. Shaaban told Agence France-Presse, adding that the South African president, Jacob Zuma, “was very positive and deplored the destruction affecting this beautiful country.”

Before the uprising, Ms. Shaaban portrayed herself as an advocate for reform and modernization, but she has rarely been seen since she offered her support for the security forces during the early days of the crackdown.

The uprising began peacefully, but elements of the opposition eventually took up arms after security forces fired on protesters.

The new defector, Brig. Gen. Mohammed Nour Ezzedeen Khallouf, the army’s chief of supplies and logistics, appeared briefly on Saturday in a broadcast on Al Arabiya.

“Arrangements for the defection from the current Assad regime started a while ago,” he said. “There was coordination with several sides from various factions of the Syrian revolution.”

His acceptance into the rebels’ ranks underscores their assertion that they will welcome anyone who switches sides even now, so deep into the conflict. General Khallouf previously commanded the Palestine Branch of the military intelligence department, a Damascus headquarters where, according to rebels and watchdog groups, many opposition members have been tortured.

Antigovernment activists said that while his high rank was notable among defector, his departure would not change things for the government, which could easily replace him.

As the conflict continues, the Syrian government has increased its use of cluster bombs, which are widely banned because those that do not explode on impact often injure civilians who find them, the international watchdog group Human Rights Watch said in a report issued Saturday. It was based on field investigations and an analysis of more than 450 videos posted online, largely by antigovernment activists.

In the past six months, the Syrian government has dropped 156 cluster bombs in 119 places, said Human Rights Watch, which is based in New York. Two recent strikes alone killed 11 civilians, including two women and five children, the group said.