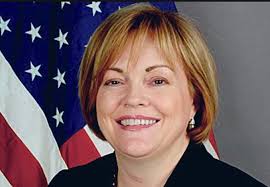 A veteran diplomat who’s served in Syria, Kuwait and Turkey will return to the Middle East as the new U.S. ambassador to Libya, President Barack Obama announced Wednesday.

If confirmed by the Senate, Deborah K. Jones will fill a post that’s been vacant since the previous envoy, Ambassador Christopher Stevens, died along with three other Americans in the Sept. 11 militant attacks on U.S. facilities in the eastern Libyan city of Benghazi.

Jones’ nomination coincided with the first official visit to Washington by Libyan Prime Minister Ali Zeidan, who said that Libyan authorities remain committed to investigating and bringing to justice the perpetrators of the Sept. 11 attacks. The embassy Jones would lead is located in the capital, Tripoli; there’s been no U.S. diplomatic presence in Benghazi since the deadly assault on the consulate and a nearby CIA station.

“I am pleased to tell you that we will soon be sending Deborah Jones to Libya as our new ambassador,” Secretary of State John Kerry said at a joint appearance Wednesday with Zeidan. “And she is a very capable and experienced diplomat, and I have no doubt that she’s going to help to strengthen the partnership between us.”

The death of Stevens, the first U.S. ambassador to be killed in hostilities since 1979, led to sweeping changes in diplomatic protection, communication and oversight after an independent review board found that security was “grossly inadequate” at the Benghazi facility.

The Accountability Review Board’s report stopped short of deeming the lapses a dereliction of duty, which would’ve required proof of intentional misconduct, and instead blamed poor leadership of senior State Department officials for leaving the Benghazi consulate highly vulnerable in a volatile city where other diplomats already had shut down operations or taken more precautions.

The debacle is sure to resurface during the Senate confirmation hearings for Jones. Republican Sens. John McCain of Arizona and Lindsey Graham of South Carolina have charged that the Obama administration tried to cover up its muddled response to the deteriorating security in Libya.

Republicans dwelled on the issue during Kerry’s confirmation hearing and don’t seem ready to let up. As recently as March 6, McCain said via his official Twitter account that unanswered questions remained in the Benghazi attacks.

Neither McCain nor Graham could be reached for comment Wednesday.

Jones is currently a scholar at the Middle East Institute in Washington. She joined the State Department in 1982, according to her online biography at the institute, and served as ambassador to Kuwait from 2008 to 2011, as well as in various positions at U.S. embassies in countries such as the United Arab Emirates, Ethiopia and Syria.

Her Washington-based assignments have included director of the Office of Arabian Peninsula Affairs and Iran. She was also senior faculty adviser for national security affairs at the U.S. Naval War College.