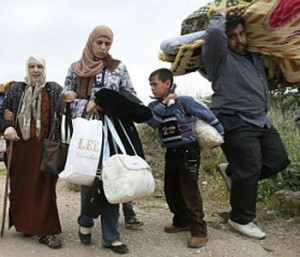 Mikati said Lebanon will need at least $370 million in support this year under the current conditions.

Mikati said hospitals were full of Syrians, the sick and wounded from the civil war next door, and doctors were struggling to prevent outbreaks of disease among 340,000 refugees crammed into host communities around the country.

Lebanon also faces rising crime, added Mikati. He said 700 Syrians were caught breaking the law in January, a high figure in a country of 4 million, and the influx of refugees into Lebanese homes had brought with it social problems including child marriage.

“We are coming to a very critical point,” Mikati told Reuters in an interview.

“We need help. Lebanon is bearing the burden of the events in Syria,” he said. “We ask Arab countries to look supportively and sympathetically at Lebanon, because Lebanon needs these countries right now.”

International donors, including wealthy Gulf Arab states, have pledged $1.5 billion for refugees and displaced Syrians, but two Lebanese ministers – for social affairs and health -told Reuters on Tuesday they had not seen a penny of that money.

Humanitarian agencies pleaded Wednesday with governments around the world to make good on pledges of aid for Syrian refugees.

Joel Charny, vice president of InterAction, urged donors to make good on their promises to the pledging conference in Kuwait in January.

So far, only around 20 percent of the $1.5 billion pledged has been received, according to figures from the U.N. Office for the Coordination of Humanitarian Affairs.

With four million Syrians, out of a total population of 20 million, now in need of assistance “the needs are overwhelming and there are numerous challenges,” said Charny.

As the Syria war enters a third year, Charny said it was “baffling considering the global attention that this crisis is receiving” that refugee programs were not fully funded despite $1.5 billion pledged in January.

“We are faced with delivering aid in the face of a medium intensity conflict, advanced weaponry is being used,” he said on a conference call.

“Our community hasn’t really been asked to do this since the Balkans,” he added, referring to the 1990s conflict which tore the former Yugoslavia apart.

The biggest chunk of some $880 million was pledged by the Gulf nations such as Kuwait and the United Arab Emirates, which each put up some $300 million.

The United States has already provided about $385 million in humanitarian assistance, with a further $115 in non-lethal aid.

During a visit to Jordan Wednesday, U.N. High Commissioner for Refugees Antonio Guterres said one million Syrians had now fled the conflict since the uprising against President Bashar al-Assad began on March 15, 2011.

It has triggered a tide of humanity, both inside and outside the country, placing a huge strain on smaller neighbors such as Jordan and Lebanon.

Jordan, with a population of only six and a half million, has taken in some 450,000 refugees over the past two years, and the United Nations estimates the figure could grow to 660,000 by the end of 2013.

Lebanon took in some 70,000 to 80,000 new refugees in February alone, with the Syrians now approaching some 20 percent of the population there.