Hezbollah’s No. 2: Syrian voters will keep Assad in power 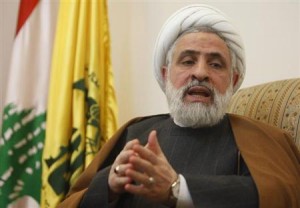 President Bashar al-Assad is likely to run for re-election next year and win, with Syria remaining in military and political deadlock until then, said the deputy leader of Lebanon’s Iranian-backed Hezbollah group.

Sheikh Naim Qassem, who predicted a year ago that Assad would not be dislodged from power, said the Syrian leader would win a vote because his supporters understood that their communities’ very existence depended on him.

“I believe that in a year’s time he will stand for the presidency. It will be the people’s choice, and I believe the people will choose him,” said the bearded, turban-wearing Shi’ite cleric, speaking carefully and deliberately.

“The crisis in Syria is prolonged, and the West and the international community have been surprised by the degree of steadfastness and popularity of the regime.”

Citing rifts among Assad’s foes inside and outside Syria, as well as disagreements among world powers over Assad’s future, Qassem said any talk of political solutions was futile for now.

“It will take at least three or four months” for any such solution, he said in a meeting with Reuters editors. “Maybe things will continue until 2014 and the presidential election.”

The two-year-old revolt against Assad is the bloodiest and most protracted of the Arab uprisings. At least 70,000 people have been killed and the violence has stoked tensions across the Middle East between the two main branches of Islam.

Some Western leaders have long predicted Assad’s imminent demise, but Qassem said he was likely to be re-elected in 2014.

Wearing brown robes and a white turban, he spoke in a windowless office in Hezbollah’s southern Beirut stronghold.

Journalists were driven to the undisclosed venue in a car with blacked-out windows, a security precaution in violence-prone Lebanon. Three Hezbollah leaders have been assassinated in the past two decades; the group blames Israel for the killings.

Hezbollah, the most accomplished military force in Lebanon, fought Israel to a standstill in a 2006 war and, with its mainly Shi’ite and Christian allies, now holds a majority of cabinet seats in Prime Minister Najib Mikati’s government.

Mikati has tried to insulate his country from the fighting in Syria but Lebanese Shi’ites and Sunnis have both been drawn into the fighting. Hezbollah denies accusations that it has sent its forces into Syria to fight alongside Assad’s troops.

Despite significant and sustained rebel gains, Qassem said the Syrian authorities had scored a string of military successes since insurgents launched attacks in Damascus a few months ago.

“The regime has started winning clearly, point by point,” he said. “And the tensions among the countries supporting the armed (rebel) groups have become clearer.”

Assad’s forces still control central Damascus and large parts of the cities of Homs, Hama and Aleppo to the north. But they have lost swathes of territory in the rural north and most of the eastern towns and cities along the Euphrates River.

In such areas, the Syrian military relies heavily on missiles, artillery and air strikes to pin back rebel advances.

Qassem said Syria only had one viable option: “Either they reach a political solution, in agreement with President Assad… or there can be no alternative regime in Syria,” he said.

Asked whether Syria might fall apart, he replied: “Everything is possible.”

Syria’s population includes Christians, Shi’ites, Alawites, Druze and Ismailis as well as majority Sunnis who include mystical Sufis and secularists as well as pious conservatives.

Qassem portrayed authorities as fighting to protect that diversity in the face of hardline Sunni Islamist rebels. “The regime is defending itself in a battle which it sees as an existential fight, not a struggle for power,” he said.

Assad also faced international opposition from countries trying to break the “resistance project”, a reference to the anti-Israel alliance of Syria, Hezbollah and Iran, he added.

Israel, which diplomats and regional security sources said bombed a convoy in Syria two months ago carrying weapons which may have been destined for Hezbollah, has warned that military action may be needed to stop Iran’s nuclear program.

Israel and Western nations suspect Iran is seeking atomic weapons, a charge it denies. Israel says a “clear and credible military threat” against Iran is needed to halt Tehran’s work.

But Qassem said the United States was reluctant to get dragged into a “costly” conflict with Tehran.

“It would not halt Iran’s peaceful nuclear program but would just delay it for a few years,” he said. “In return America’s interests in the region and those of its allies and Israel would be in great and unpredictable danger.”

Washington’s caution over Iran had echoes in what he said was its equivocal position towards Syria.

Although the United States says it provides only non-lethal aid to the rebels, Qassem said the presence of U.S.-made weapons in Syria proved it had at very least given approval for third countries to ship arms to Assad’s opponents.

But the prolonged fighting had put Washington in a dilemma about whether to “follow the political path” instead, he said.

“America has lost its way over the steps it wants to take in Syria. On the one hand it wants the regime overthrown, and on the other it fears losing control after the regime falls.”