Black Smoke From Conclave Signals No Pope on First Day 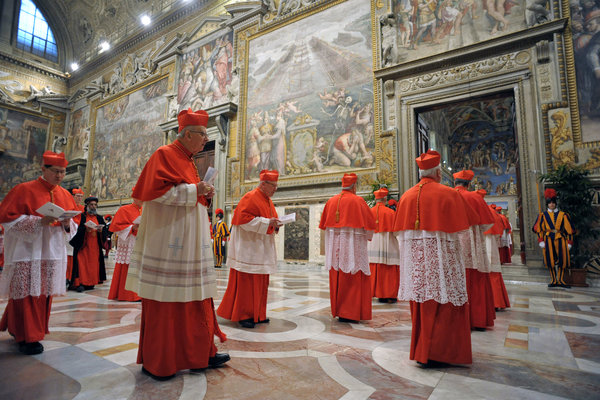 It billowed, and it was black.

There was no mistaking the outcome this time. The cardinals voting for a pope on Tuesday came up with no winner on their first round of balloting, signaled by the black smoke that poured out of a jerry-rigged copper chimney on the roof of the Sistine Chapel.

At the last papal election, in 2005, the color was indeterminate in an early round, prompting confusion. But the cardinals locked inside the chapel and the technicians who prepared the chemicals to combine with the burning ballots must have done something right.

Technology helped too. By the time the smoke emerged, at 7:41 p.m., it was dark outside. But giant screens in St. Peter’s Square showed the spot-lit smokestack clearly. On a cold and rainy night, the square was still packed, and some people shrieked in excitement at the spectacle.

But not some of the more jaded Romans, a seen-it-all breed. “We’re a little disappointed,” said Angelo Bonarelli, who was there with his wife Tiziana. “It’s a long, cold, rainy day and there was black smoke.” Mrs. Bonarelli said they would be back Wednesday, when the cardinals resume their voting rituals at 9:30 a.m. “We’re from Rome. It’s a tradition.”

The outcome on Tuesday was expected, since all 115 of the cardinals are theoretically candidates, and the winner must receive two-thirds, or 77, of the votes. In past modern conclaves, the first ballot essentially served as a primary, with a number of cardinals emerging as leading vote-getters. Subsequent rounds made clear where the votes were flowing. The smoke will be white when a pope is elected. The schedule calls for two rounds of voting in the morning and two in the evening, as needed.

The conclave opened 12 days after Benedict XVI became the first pope in modern times to renounce the throne of Peter. It was a period fraught with tense discussions about what kind of pope was needed for a church threatened by secularism, the scandal of clerical sex abuse and a Vatican bureaucracy stippled with corruption.

The script was clear for the cardinals, and Vatican television showed the conclave’s opening pageantry. The eminences glided two by two from the Pauline Chapel in the Apostolic Palace, through the Sala Reggia and into the Sistine Chapel, approached the altar and bowed before it.

They took up positions behind folded placards with their names on tables placed along the length of the chapel’s walls. Green ritual books and red folders, presumably with the ballots inside, lay before them, and they placed their birettas — square, peaked crimson hats — on the tables.

Cardinal Giovanni Battista Re, an Italian and the senior cardinal present, led them in a collective oath, in Latin, to maintain secrecy and obedience to the constitution on papal transition. They also made an oath that if elected they would faithfully carry out the duties of a pope and defend the Holy See. Each then individually swore adherence with a hand on the gospel, in a Latin accented by their native languages — German, English, Arabic, Spanish, and so on.

“There were all in excellent form,” said the Vatican spokesman, the Rev. Federico Lombardi, who was present for the swearing in. “They were all there. We counted,” he said with a smile.

He was there in his role as prefect of the papal household, Father Lombardi said. Benedict named him prefect several months before announcing his resignation. The former pope was 17 miles away at the papal summer residence in Castel Gandolfo, and Archbishop Gänswein’s dual role has reminded some in the Vatican about the awkwardness of having a former pope hovering nearby — an uncomfortable reminder of past schisms in the church.

Monsignor Marini was then shown closing the two carved wooden doors, with a loud click.

After listening to a meditation pronounced by a clergyman and bidding farewell to him and Father Marini, the princes of the church got down to business, according to the rules governing papal transitions. They wrote the name of their candidate on rectangular pieces of paper and tipped them into a flying-saucer-shaped urn, to be counted by hand and recorded by three cardinals chosen by lot.

In the morning, the cardinals had celebrated a special Mass led by Cardinal Angelo Sodano, who gave the last major public statement by a Vatican prelate before the church’s next supreme pontiff emerges. It was a call to unity for a church whose Vatican leadership has been riven by scandal, and whose cardinals are wrangling over what kind of pope they want.

“St. Paul teaches that each of us must work to build up the unity of the church,” the cardinal said in his homily. “All of us are therefore called to cooperate with the pastors, in particular with the successor of Peter, to obtain that unity of the holy church.”

Cardinal Sodano has long been one of the most influential figures in the Vatican and the ultimate insider, serving both John Paul II and Benedict as secretary of state. He referred to the “luminous pontificate” of the “beloved and venerated Pontiff Benedict XVI, to whom in this moment we renew our profound gratitude,” drawing long applause from the worshipers. A number of the cardinals, but not all, clapped modestly.

The cardinals have appeared divided over whether the next pope should be an outsider who would reform the Italian-dominated Curia, or Vatican bureaucracy or a galvanizing leader who could shore up the church in the face of growing secularism. Benedict’s decision to resign was not universally welcomed in their ranks, according to news reports.

The homily, firmly grounded in Gospel readings, was markedly different from the last such speech, which was given by Cardinal Joseph Ratzinger ahead of the 2005 conclave that chose him pope. Then, Cardinal Ratzinger delivered a sharp warning against departing from fundamental Catholic teaching, denouncing what he called a “dictatorship of relativism.”

That showing was considered a factor in his election. But Cardinal Sodano will not take part in this conclave. He is over the age limit of 80.

“It wasn’t anything like Ratzinger’s,” said the Rev. Thomas Reese, a senior fellow of the Woodstock Theological Center at Georgetown University who was in Rome following the conclave. “That was tough. This was more like a homily on the readings than an agenda for action.”

Christopher M. Bellitto, a church historian at Kean University in Union, N.J., suggested that Cardinal Sodano might have been issuing a “plea for gentleness” to the cardinals who may be looking for a pope to shake up the bureaucracy of the Vatican. “It’s pretty clear there’s going to be a night of the long knives,” he said.

Photo: All 115 of the cardinals are theoretically candidates, and the winner must receive two-thirds, or 77, of the votes