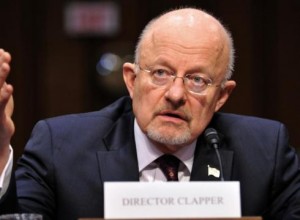 The erosion of the Syrian regime’s authority is accelerating, and the “increasingly beleaguered” government, which has been unable to defeat insurgents with conventional weapons, might be prepared to use chemical weapons, the top U.S. intelligence official said Tuesday.

James R. Clapper, director of national intelligence, also noted that elements of Syria’s biological weapons program “may have advanced beyond the research and development stage,” and that Syria possesses conventional and chemical weapons systems that “could be modified for biological agent delivery.”

“The opposition is gaining in strength; it is gaining territory,” Clapper said in a prepared statement to the Senate Intelligence Committee on Tuesday. “At the same time, the regime is experiencing shortages in manpower and logistics.”

The prolonged instability is also allowing al-Qaeda’s al-Nusrah Front affiliate to establish itself in Syria, according to Clapper, who described the group as “pretty astute” in its ability to provide municipal services amid the broadening humanitarian crisis.

Clapper was testifying Tuesday along with the heads of the CIA, the FBI and the Defense Intelligence Agency, among others, as part of the intelligence community’s annual assessment of worldwide threats. The hearing covered the proliferation of weapons of mass destruction, terrorism, cybersecurity threats, regional instability, climate change and competition for natural resources.

Clapper warned that the across-the-board budget cuts forced by the process known as sequestration could have a serious impact on intelligence-gathering. “The scope and magnitude of the cuts will be long-lasting,” he said, noting that the degradation of the intelligence community will be “invisible” until there is a failure.

He said the fallout from the Arab Spring has allowed jihadist groups to exploit ungoverned spaces in countries where new and weak governments have struggled to establish political stability and field capable security forces.

“The struggles of new governments in places like Tripoli and Sanaa to extend their writs, as well as the worsening internal conflict in Syria, have created opportunities for extremist groups,” Clapper said. He added that “some transitioning governments are more skeptical than their predecessors about cooperating with the United States and are concerned about protecting sovereignty and resisting foreign interference. This has the potential to hamper U.S. counterterrorism efforts and other initiatives to engage transitioning governments.”

Officials said al-Qaeda’s core leadership group is so degraded that it is probably unable to carry out large-scale attacks in the West. A serious threat, said Matthew Olsen, director of the National Counterterrorism Center, emanates from “homegrown extremists who may well be inspired or radicalized by the message that al-Qaeda sends.”

Drones have been central to the campaign against al-Qaeda in Pakistan and elsewhere overseas, and members of the Intelligence Committee complained about the executive branch’s reluctance to allow them to read critical legal memos, until John O. Brennan was up for confirmation as CIA director, and the conditions under which they had to read them.

Sen. John D. Rockefeller IV (D-W.Va.) complained that when he read a classified Justice Department memo, a “minder” was there to watch him. “It was an insult to me,” he said.

The Senate hearing was divided into open and closed sessions, and several times Clapper indicated that he would give more detailed responses on subjects such as Iran during the closed session.

Clapper said the intelligence community does “not know if Iran will eventually decide to build nuclear weapons.” He said there were “indications” that sanctions were leading to a change in the approach of Iran’s leadership, specifically its supreme leader, Ayatollah Ali Khamenei, but he held back on specifics until the classified session.

“We assess Iran is developing nuclear capabilities to enhance its security, prestige and regional influence and give it the ability to develop nuclear weapons, should a decision be made to do so,” Clapper said. “Of particular note, Iran has made progress during the past year that better positions it to produce weapons-grade uranium (WGU) using its declared facilities and uranium stockpiles, should it choose to do so. Despite this progress, we assess Iran could not divert safeguarded material and produce a weapon-worth of WGU before this activity is discovered.”

Clapper said recent statements by North Korea, in which it said it had “completely scrapped” the 1953 armistice agreement that ended the Korean War, were alarming. The country also recently conducted a third nuclear test.

At a separate hearing Tuesday, Air Force General C. Robert Kehler, commander of the U.S. Strategic Command, told lawmakers he was confident that the United States can defend against a “limited attack” from either North Korea or Iran with ground-based interceptors.