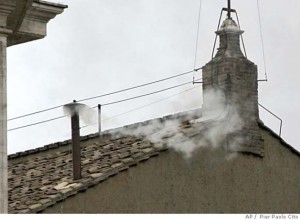 White smoke rose over the Sistine Chapel on Wednesday, heralding the election of a new pope after the 115 voting cardinals of the Roman Catholic Church reached a conclusion on the 266th pontiff after less than 24 hours of deliberation.

Crowds erupted in joy in St. Peter’s Square and waited anxiously for the presentation of the still unknown new pope, who was expected to greet the world on the balcony of the St. Peter’s Basilica for the first time before 8 p.m. Rome time (3 p.m. Eastern time).

The new pope will reveal himself to the world with a cry of “habemus papam” on the balcony after entering the so-called room of tears, donning white papal vestments and praying with the cardinals who elected him.

The white smoke, accompanied by the pealing of bells to eliminate any confusion, billowed from a flue on the roof of the Sistine Chapel, prompting a throng gathered in the square to erupt in applause and cheers. But the identity of the new leader of the world’s 1.2 billion Catholics awaited a subsequent announcement of “habemus papam,” or “we have a pope.”

The election came after two rounds of balloting in a morning session. The 115 voting cardinals reconvened about 4:30 p.m. (11:30 a.m. Eastern) to vote up to two more times before either electing a new pope or adjourning for the day.

To be chosen, a candidate had to win the support of at least two-thirds of the 115 voting-age cardinals. Reported front-runners included Cardinals Angelo Scola of Italy, Marc Ouellet of Canada, and Odilo Pedro Scherer of Brazil.

Because no one bloc of cardinals — organized around passport or priorities — was large enough on its own to generate the requisite 77 votes, a candidate needed to consolidate support from a cross-section of electors. And if consensus remained elusive, the cardinals could look to the less familiar names in their college, which is what happened when John Paul II was chosen in 1978.

“Today is the fundamental day,” said Marco Politi, a papal biographer and a veteran Vatican watcher with the newspaper Il Fatto Quotidiano. “It is a referendum on Scola and whether the papacy will go back to an Italian or cross the Atlantic. For the first time there is a real possibility to have a pope from the Americas.”

The Rev. Frederico Lombardi, a Vatican spokesman, told reporters the cardinals returned to their quarters at Casa Santa Marta shortly before noon, after two morning votes did not result in a papal selection.

During a lunch and rest break that lasted nearly five hours, they were permitted to smoke, drink wine and — more importantly given their ongoing deliberations — talk and visit one another’s rooms.

“This is an extremely beautiful and intense moment,” Lombardi told reporters after the morning session ended, emphasizing that no pope since Pius XII has been chosen before the fourth ballot. “This is very normal. This is not indicative of any division among the cardinals.”

Benedict, now pope emeritus, spent much of Tuesday watching the pre-conclave proceedings on television and secluded in prayer, Lombardi said.

“This is an extremely beautiful and intense moment,” Lombardi told reporters after the morning session ended, emphasizing that no pope since Pius XII has been chosen before the fourth ballot. “This is very normal. This is not indicative of any division among the cardinals.”

Benedict, now pope emeritus, spent much of Tuesday watching the pre-conclave proceedings on television and secluded in prayer, Lombardi said.

In St. Peter’s Square, faithful from many nations sang hymns and glanced frequently toward the six-foot chimney. Some clothed themselves in their national flags, cheerleading for the cardinals from their countries.

“Having a Brazilian pope would be better than winning the World Cup,” said Bruno Smania, a 15-year-old high school student from the Brazilian state of Parana, where Scherer spent part of his childhood. “It would be so important us, a sign that Brazil has really arrived.”

The sense that the next pope could revitalize the faith in whatever country he hails from was widely held here. Adam Potter, a Pittsburgh-born seminarian and former assistant to Cardinal Donald Wuerl of Washington, was camping out with a group of American and British student priests. He said he’d support any pope, but he hoped for an American.

“It’s easy for Americans to feel disconnected from the church,” Potter said. “But if we see [Cardinal Timothy] Dolan or Cardinal Sean O’Malley become pope, I know there would be a powerful feeling of joy in the United States, and I feel that’s exactly what we need.”

Conclaves are officially open-ended, but for nearly 200 years, none has lasted more than five days, and most have taken only two or three days. Cardinal Joseph Ratzinger, who became Benedict XVI, was viewed as a strong front-runner before the last conclave, in 2005. This time around, no candidate has clearly claimed that title.

Instead, the focus was on a small group of papabili, or possible popes. In addition to the front-runners, other possibilities were Dolan of New York and O’Malley of Boston, either of whom, if elected, would emerge as the first “superpower” pope. Scola appeared to be trending the most among analysts, although observers said his chances likely would diminish if the conclave lasted for several days.

“The shorter it goes, the better the chances for any of the front-runners,” the Rev. Thomas Reese, an analyst for the National Catholic Reporter, said on Tuesday. “Should it go more than two or three days, then all bets are off, and the options for the next pope grow.”

Angela Troilo, 77, stood by the obelisk in the center of the square Wednesday morning, surrounded by puddles and looking up at the chimney. “The church used to do so much!” Troilo said, describing herself as a poor working woman who had been let down by her country and needed her church. “The Italian government is dead and buried. We need someone with energy, who can command!”

Cardinal John Olorunfemi Onaiyekan of Nigeria, in an interview before the conclave, said the next pope, like any individual, “will come with his own baggage, his own background, competence, training, spiritual attitudes” — and will find that guiding the church can be more complicated than governing a single country.

“As a nation, the church is a universal association,” Onaiyekan said. “The church is spread all over the world. . . . And each distinct part of the church, according to God’s will, is headed by bishops whose job it is to face the realities around them and use them to defend the principles of the church and move the church forward.”

Archbishop Vincent Nichols of Westminster agreed. “The challenges are in some ways quite startling,” he said. “There is such cultural change going on around the world, and such shifts of paradigm.”

Before their first journey Tuesday to the Sistine Chapel, the cardinals celebrated a Mass dedicated to the pope’s election. Angelo Sodano, dean of the College of Cardinals, delivered the homily, emphasizing the need for a good pastor and a strong commitment to evangelization.

“In the wake of this service of love toward the church and toward all of humanity, the last popes have been builders of so many good initiatives for people and for the international community, tirelessly promoting justice and peace,” said Sodano, who is past 80 and therefore not eligible to participate in the conclave. “Let us pray that the future pope may continue this unceasing work on the world level. . . . Let us pray that the Lord will grant us a pontiff who will embrace this noble mission with a generous heart.”