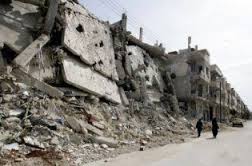 BEIRUT , Lebanon – Syrian warplanes bombed the shattered Baba Amr district in the central city of Homs on Monday, a day after rebels made a surprise push into their former bastion, which had been in army hands for a year.

The communally mixed city of Sunni Muslims and Alawites, the minority sect that has dominated Syria since the 1960s, has been a major battleground in a two-year-old revolt against President Bashar al-Assad that has claimed about 70,000 lives.

The Syrian Observatory for Human Rights, which monitors the conflict, quoted an opposition activist in Baba Amr as saying the planes had attacked the outskirts of the district, which was now partially controlled by rebel units.

Homs, 140 km (88 miles) north of Damascus, lies on a road juncture linking army bases on the Mediterranean coast, home to many Alawites, and government forces in the capital Damascus.

Sunni rebels punched through army lines in the north and west of Homs on Sunday to loosen a months-long military siege on their strongholds in the centre of the Syria’s third biggest city, opposition sources said.

Homs-based activists said there were “light clashes” in Baba Amr on Monday.

Assad, fighting to maintain his family’s four-decade-old grip on Syria, appears to be focusing his military campaign on holding the main cities, along a highway axis running north of Homs to Hama and Aleppo and south to Damascus and Deraa.